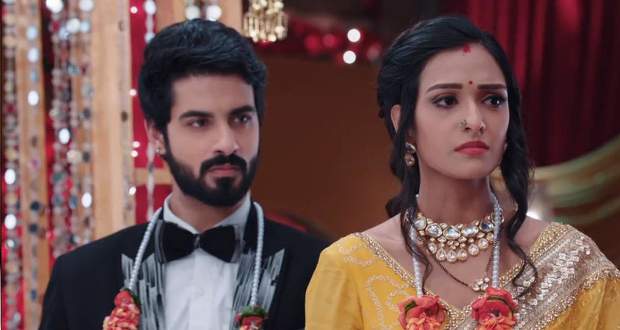 Today's Yeh Hai Chahatein (YHC) 17 Dec episode starts with Mahima slapping Preesha for her decision of marrying Yuvraj. Everyone gets a shock on witnessing Preesha and Yuvraj married to each other.

Rudraksh decides to marry Mahima to get Saransh’s custody. Mahima refuses to marry him but Rudraksh gives a warning to her.

Mahima gets ready for the marriage which gives a huge shock to everyone present there. Further, Mahima and Rudraksh get hitched, while GPS arrives there at the venue.

He questions Preesha about everything that happened but she denies to tell anything and leaves from there.

Later, Rudraksh meets Yuvraj and feels grateful to him. Preesha comes there and hugs Rudraksh tightly.

They both get emotional and Preesha apologises to Rudraksh for hurting him, while Rudraksh reveals that it was her brilliant plan.

© Copyright tellybest.com, 2020, 2021. All Rights Reserved. Unauthorized use and/or duplication of any material from tellybest.com without written permission is strictly prohibited.
Cached Saved on: Sunday 17th of January 2021 09:37:23 AM