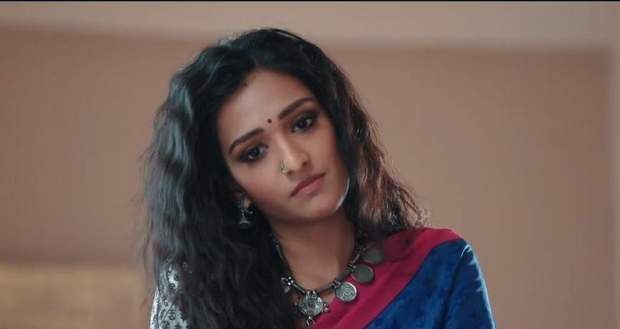 Today's Yeh Hai Chahatein (YHC) 18 Jan episode starts with Vasudha asking GPS why he requested Rudraksh to come while Sarda comes other with Saaransh and tells her that she told GPS to Rudraksh so that he can drive them home.

Mahima, Saaransh and Rudraksh go to her room while elsewhere, Gautam is in the secret studio when someone knocks.

The third time, he opens the door to see the delivery boy who gives him pizza and leaves.

Gautam eats the pizza and rests while suddenly Mahima puts him at gunpoint and threatens to kill him.

A flashback shows her putting a tracker on him when she went to the hotel to kill him and getting inside while she went to look who ringed the doorbell.

Preesha goes to gig him and he cries out which confuses her and she asks him if he is hurt.

He denies and leaves with Rudraksh while Preesha wonders why Saaransh lied to her.

Meanwhile, Mahima fire the gun at Gautam but no bullet comes out while he gets more scared after each round.

Gautam starts having pain in throat while she tells him that she never intended to kill him by gun and reveals that she put poison in his pizza.

He does while Mahima calls in her goon and tells him to clear all the traces of Gautam being there and hide his dead body.

Next morning, Rudraksh and Preesha go to the warehouse to meet Gautam but are confused to see him and his belongings missing.

Rudraksh calls the airport and confirms that Gautam is not on his flight.

Preesha thinks that Mahima did it and plans to confront her.

At the Khurana house, Sharda and Mahima are telling Saaransh about the Lohri celebration while Preesha comes there.

She and Mahima go inside a room and she locks the door.

She asks Mahima about Gautam's whereabouts and she jokingly says that she killed him.