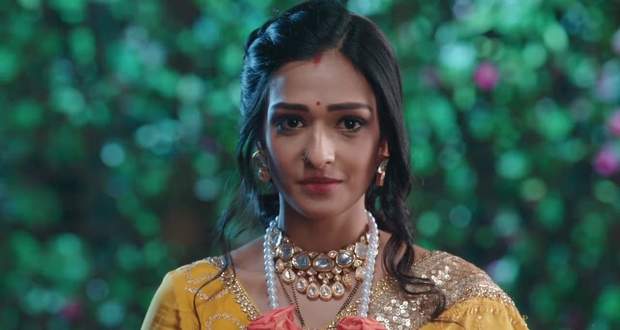 In the present, Rudraksh is getting angry with Yuvraj for touching Preesha.

Preesha feels worried about the plan while Rudraksh assures her that it is all fake.

Yuvraj praises all three of them saying that their plan worked smoothly.

Rudraksh voices his concern for Saaransh while he gets a call from Sharda telling him to come home for Grahpravesh with Mahima.

Rudraksh and Preesha go on their way while Rudraksh feels worried for Preesha.

He reaches home and goes inside with Mahima doing the Grahpravesh ritual saying that he is worried about how Saaransh will react to this marriage.

Everyone goes inside while Mahima does her own Grahpravesh and reveals her plan of getting all the money from Saaransh and Rudraksh.

Flashback goes to Mahima on a date with some rich guy when she sees an article of Rudraksh, Preesha, and Saraansh.

She forms a plan to gain Saraansh's money and the flashback ends.

Mahima reveals that she was the one who burned down the mental clinic.

Upcoming Yeh Hai Chahatein episode update: Saaransh to lock himself up in his room.

© Copyright tellybest.com, 2020, 2021. All Rights Reserved. Unauthorized use and/or duplication of any material from tellybest.com without written permission is strictly prohibited.
Cached Saved on: Friday 22nd of January 2021 10:09:28 PMCached Disp on: Tuesday 26th of January 2021 07:21:56 AM