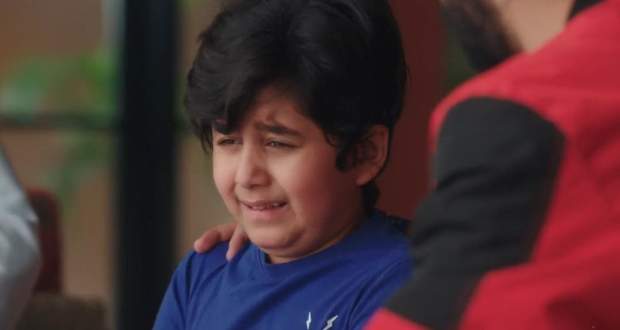 Today's Yeh Hai Chahatein (YHC) 1 Jan episode starts with Mahima suggesting the Khurana's have a Christmas party and telling them to give their guest lists to her.

Saaransh comes there crying and says that he failed for the first time as he didn't study while Sharda taunts Mahima for not taking care of Saaransh's studies.

Rudraksh comes there and tries to console him while taking him to his rooms.

Saaransh calls Preesha and informs her about him failing while she consoles him.

Saaransh tells her to come home and starts crying into the pillow while Rudraksh talks to Preesha.

Sharda hears him talking to Preesha and forms a plan.

She goes to the living room and starts shouting saying she is having stomach pain.

She tells them to call Preesha and she comes there.

Sharda tells her that she needs an internal check-up and makes everyone else leave the room.

After they leave, Sharda tells Preesha that she was faking her pain and tells her to meet Saaransh as he is very upset about failing.

Later, Preesha gives medicine prescription to Rudraksh inside which she wrote to meet her in his room.

She fakes a fight with him and goes upstairs with Saaransh where she tells him that the fight with Rudraksh was fake.

Preesha goes to the bathroom where Rudraksh comes and she tells him that Sharda might know about their plan and is supporting them.

Further, she tells him about the last night's incident while Mahima comes to his room and hears voices coming from the bathroom.

Mahima opens the door but Rudrakash is standing there in a towel and shouts at her to go.

Mahima goes to Sharda's room to check if Preesha is there but gets confused when she sees her there.

© Copyright tellybest.com, 2020, 2021. All Rights Reserved. Unauthorized use and/or duplication of any material from tellybest.com without written permission is strictly prohibited.
Cached Saved on: Thursday 21st of January 2021 07:18:13 PM