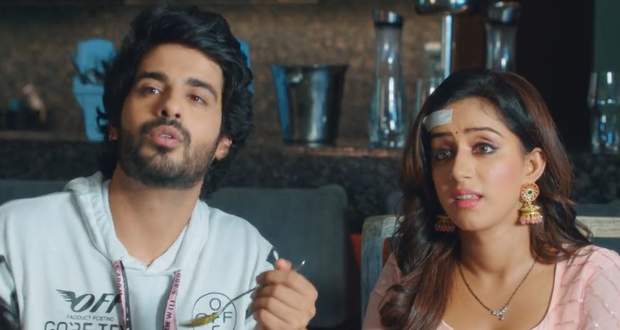 Meanwhile, Rudraksh comes and he explains to Preesha everything that happened to him and Sonia.

Later, Yuvraj shows indecent photos of Rudraksh and Sonia to Kabir and Sulochana while they feel happy for Yuvraj's evil plan.

Sulochana says to Yuvraj to show the photos to Preesha but Yuvraj refuses her.

Yuvraj says that Preesha has trust in Rudraksh and she doesn't believe it.

Yuvraj also says that he clicked the photos for showing them in the court as the second proof against Preesha and Rudraksh.

Meanwhile, Mishka observes Preesha giving tablets to kids and thinks of a plan against Preesha.

At night, Preesha gives Vitamin C tablets to Sunny and Saraansh and they spend fun time with Preesha and Rudraksh and sleep.

Thereafter, in the morning, Preesha and Rudraksh try to wake up Sunny and Saraansh while they fail to wake up.

The doctor says that they are intoxicated by taking medicines.

Preesha explains that she gave vitamin C tablets to Sunny and Saraansh.

The doctor says that the tablets given by Preesha are sleeping pills and he threatens the Khuranas against filing a police complaint.

Rudraksh shouts at the doctor for warning Preesha by saying about the police complaint.

Kabir and Mishka manipulate the doctor and lies about Preesha and Rudraksh's parental caring towards Sunny and Saranash.

By listening to this, the doctor decides to file a complaint against Preesha and Rudraksh.

Preesha feels guilty for not checking vitamin C tablets and she thinks that how they turned into sleeping pills.