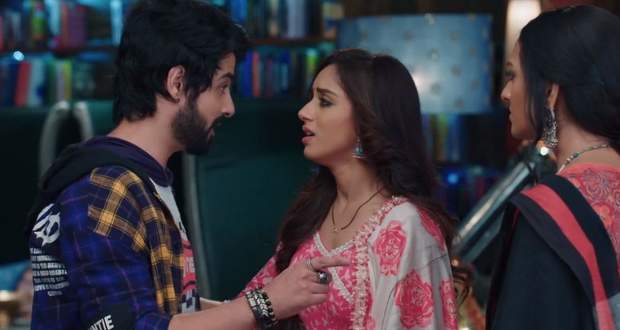 Today's Yeh Hai Chahatein (YHC) 23 Nov episode starts with Mahima requesting Preesha to give Saransh back to her. Preesha says that she will talk to Rudraksh first and then will take any final decision.

Ahana uses Saransh to get into the house, while Mahima asks Preesha to help her in telling Saransh the truth about her mother.

Saransh comes there and questions Preesha that what she wants to tell him. Preesha sends him inside the room along with Ahana and Mishka.

Rudraksh tells Mahima’s story to his parents and Preesha arrives there to talk to him. She informs Rudraksh that she is not the biological mother of Saransh.

Rudraksh tells her that he knew it already as her DNA never matched Saransh’s DNA. Preesha gets emotional and apologises to him for not telling him the truth.

She informs him that Mahima wants Saransh back in her life. Rudraksh angrily says that he will not let Mahima take Saransh away from them.

Preesha tries to make him understand that Mahima is the biological mother of Saransh, while Rudraksh doesn’t listen to her and goes to argue with Mahima.

Further, Ahana gets successful in knowing Mahima’s story from Sharda. Elsewhere, Mahima requests Rudraksh to give Saransh back to her and tells him that she cannot live without Saransh.

© Copyright tellybest.com, 2020, 2021. All Rights Reserved. Unauthorized use and/or duplication of any material from tellybest.com without written permission is strictly prohibited.
Cached Saved on: Sunday 17th of January 2021 05:40:39 AM