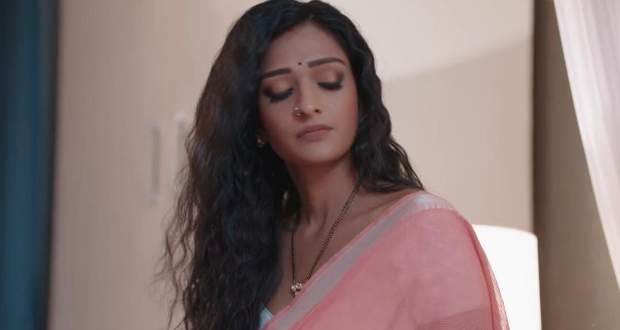 Mahima tells Preesha to feed Saaransh while she packs her belonging.

Mahima leaves with Saaransh and Rudraksh comes out of hiding.

In the flashback, Mahima calls her mother and tells her that she is outside their house while Yuvraj overhears them.

Yuvraj calls Preesha and informs her that Mahima is coming after which Rudraksh hides and the flashback ends.

Rudraksh and Preesha go through the diary of the beggar and find that a page is missing. Rudraksh drags the pencil with lightweight over it and the written thing appears.

Preesha says that they are addresses with names.

They decide to go to Arjun Varma's house to get a clue on Mahima being con the next day and Rudraksh leaves.

At Khurana mansion, Mahima gets annoyed by Saaransh making sounds while playing and she tells him to go to sleep but he declines.

Mahima gives him more than necessary cough syrup and makes him sleep.

Later, Mahima gets ready while talking to herself in the mirror about her plan to seduce Rudraksh.

She goes to Rudraksh's room and tries to seduce him but he makes an excuse and goes to the restroom.

At midnight, Mahima thinks that Rudraksh is asleep and puts her arm around him but he wakes up and angrily goes to sleep in Saaransh's room.

The next morning, Rudraksh picks up Preesha and they leave to meet Arjun Varma.

© Copyright tellybest.com, 2020, 2021. All Rights Reserved. Unauthorized use and/or duplication of any material from tellybest.com without written permission is strictly prohibited.
Cached Saved on: Saturday 23rd of January 2021 03:05:07 AM