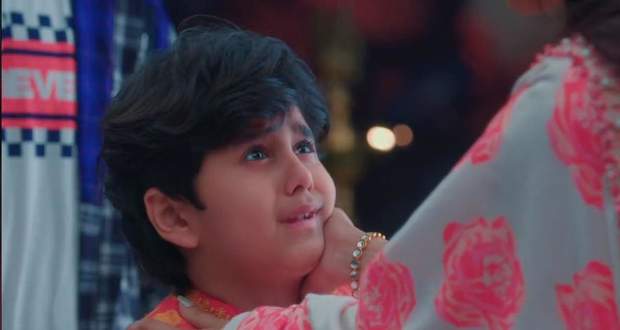 Today's Yeh Hai Chahatein (YHC) 24 Nov episode starts with Mahima requesting Rudraksh to give Saransh back to her. Rudraksh says that he has lost his brother already and cannot lose his brother’s son now.

Mahima promises to give lots of love to Saransh but Rudraksh refuses to give Saransh to Mahima. He asks her to stay at the Khurana house so that she can stay closer to Saransh.

Ahana overhears their conversation and gets angry with Rudraksh’s decision. She makes a plan and goes to meet Saransh in his room.

She tells Saransh that Mahima is his real mother, while Saransh doesn’t believe her. Meanwhile, Mahima warns Rudraksh that she will file a case to get Saransh’s legal custody.

Saransh overhears their conversation and shouts that Preesha is his real mother. He gets emotional and runs to hug Preesha.

He tells Preesha that Ahana told him about his two mothers. Preesha tells the truth to Saransh that Mahima is his real mother.

Saransh feels broken and runs from there towards the main gate of the house. Everyone searches for him outside the house but couldn’t find him anywhere.

Rudraksh asks Balwant to talk to the police commissioner, while Ahana acts emotional and Rudraksh shouts at her for telling the truth to Saransh.

Yuvraj witnesses Saransh running on the road. He stops Saransh and questions him about the reason he was crying.

He then offers ice cream to Saransh, while Saransh tells him that Preesha is not his real mother.

© Copyright tellybest.com, 2020, 2021. All Rights Reserved. Unauthorized use and/or duplication of any material from tellybest.com without written permission is strictly prohibited.
Cached Saved on: Sunday 17th of January 2021 04:33:17 AM