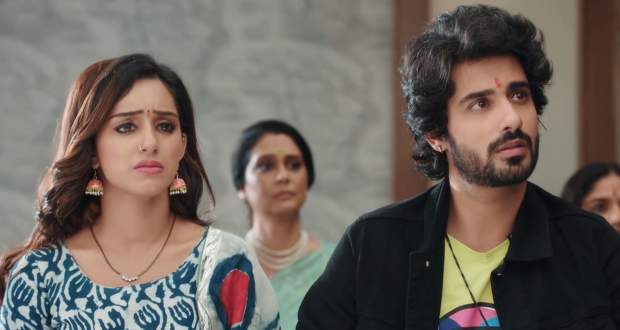 Mishka replies to him that Preesha is a negligent mother for Saraansh and also tells that she takes good care of Sunny instead of Saraansh.

Later, Kabir's lawyer argues that they are also not good parents of Sunny while she calls the adoption centre manager.

The manager says that Sunny has come to their adoption centre not to live with Preesha and Rudraksh.

Meanwhile, Yuvraj attempts to save Rudraksh but Kabir's lawyer calls Sonia to reveal her relationship with Rudraksh.

Thereafter, Sonia shows the indecent photos of her and Rudraksh to the court which are taken by Yuvraj earlier.

Sonia lies about Rudraksh and says that he misbehaved with her which makes Rudraksh and Preesha furious with Sonia.

On the other hand, Sulochana calls Sharda to inform her about Saraansh who wants to come to the court to save Preesha and Rudraksh.

Sharda tells Sulochana to take care of Saransh until they return home.

In the court, to solve wild allegations on Rudrash, Yuvraj argues with Mishka and asks about her premarital pregnancy.

Upcoming Yeh Hai Chahatein (YHC) episode update: Saraansh tells the court that he wants Kabir and Mishka as his parents