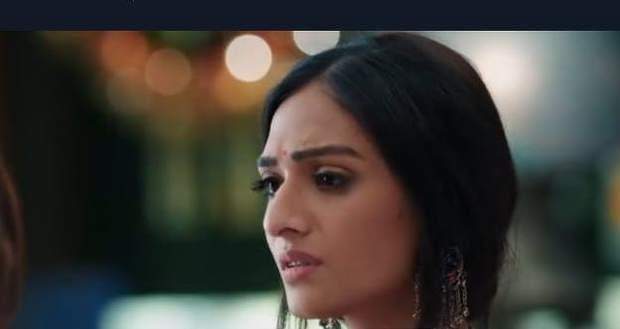 Rudraksh also hugs him and requests to not to go anywhere again. He then questions Yuvraj about the place where he found Saransh and then feels grateful to him.

Yuvraj asks Rudraksh to take care of Saransh, while Rudraksh taunts him to leave his house. Yuvraj asks him to pay the amount he spent on Saransh.

Further, Saransh apologises to Preesha for hurting her. Rudraksh gets angry with Mahima for only thinking about herself.

Mahima accepts her mistake and feels relieved to see Saransh happy with Preesha and Rudraksh.

She then leaves with her parents from the Khurana house, while Saransh tells Preesha that he is only her son and no one can separate them.

Mahima gets emotional on thinking about her bad destiny. Meanwhile, Preesha gets worried for Mahima and prays to God to take care of her.

Mahima gets unconscious on taking an overdose of sleeping pills, while her Amma rushes to call GPS to save Mahima.

GPS calls an ambulance and then informs Preesha about Mahima’s suicide attempt. Preesha starts panicking and Rudraksh tries to calm her down.

He takes Preesha to the hospital to see Mahima. Later, the doctor informs Mahima’s family that Mahima is mentally unstable and to not to give any stress to her.

The next morning, Mahima apologises to Preesha for disturbing everyone so much. She tells Preesha that she doesn’t have any control over her mind.

© Copyright tellybest.com, 2020, 2021. All Rights Reserved. Unauthorized use and/or duplication of any material from tellybest.com without written permission is strictly prohibited.
Cached Saved on: Sunday 17th of January 2021 05:07:34 AM