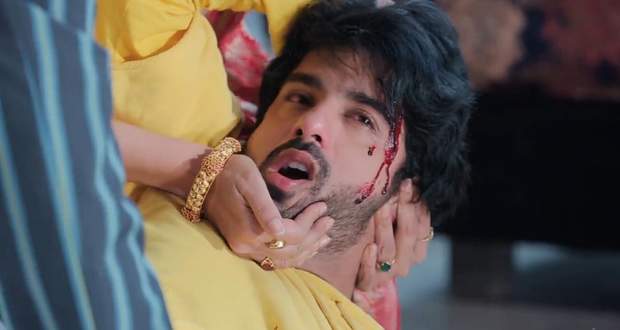 Today's Yeh Hai Chahatein (YHC) 26 Jan episode starts with Preesha calling Mahima and informing her that Rudraksh is at her home which angers Mahima and he disconnects the call.

Sharda says that she is going to bring him back and goes while Mahima follows her.

They bring Rudraksh back to Khurana house.

Rudraksh wakes up while Mahima tells her to rest but she shouts at her.

Balraj berates her for not thinking about his concerts and his career while Rudraksh announces that he will not do any concerts or recordings until Preesha talks to him.

Rudraksh falls from the stairs and wounds his head while Balraj tells to take him to the hospital.

However, Rudraksh says that he'll go to Preesha's hospital only and they take him them.

He demands to get treated by Preesha and the doctor calls her in and she does his treatment.

Rudraksh holds her hand and requests her to talk to him while Yuvraj comes there and shows him a restrainment order against Rudraksh.

He warns him to never get close to Preesha and leaves with her.

The Khurana's try to convince Rudraksh to follow the legal orders but he tells them that he needs to leave and kicks everyone out.

He reaches Preesha's home and tries talks to Preesha while he gets into a physical fight with Yuvraj.

GPS kicks him and calls Mahima to take Rudraksh with her.

Rudraksh keeps knocking on their house while GPS calls the security guard and tells him to kick out Rudraksh from the building.

The security tries to take him away while he makes a ruckus.

Preesha goes downstairs to tell him to leave.

Upcoming Yeh Hai Chahatein episode update: Rudraksh to be taken away by police.

© Copyright tellybest.com, 2020, 2021. All Rights Reserved. Unauthorized use and/or duplication of any material from tellybest.com without written permission is strictly prohibited.
Cached Saved on: Thursday 4th of March 2021 04:05:44 AMCached Disp on: Friday 5th of March 2021 09:59:08 PM