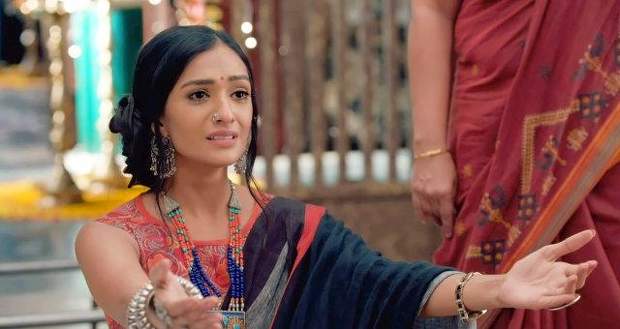 Today's Yeh Hai Chahatein (YHC) 26 Nov episode starts with Preesha asking Mahima to take rest for some time. She tells Rudraksh that she wants to talk to him about something important.

She requests Rudraksh to find a way to get Mahima out of the chaos. Rudraksh says that he doesn’t want to lose Saransh.

Preesha advises to let Mahima stay with Saransh, while Rudraksh angrily denies to it. They both get into an argument and Mahima asks them to not to argue over her.

She apologises to both of them for disturbing their peace. Rudraksh tells her that he has got his brother back in the form of Rajiv.

Later, Rudraksh plays music in the car to calm down Preesha’s anger. He romantically apologises to her but Preesha doesn’t react to his any action.

He gets out of the car and stands on the top of the car to convince Preesha. He starts shouting in the public area and asks Preesha to forgive him for his rude behaviour.

They both share a sweet moment together, while Balwant informs Rudraksh that he is going to have his first live concert after the lockdown.

Later, Mahima gets worried and decides to leave the Shrinivasan house.

She packs her bags and starts walking in the mid of the road, while Preesha witnesses Mahima on the road and asks Rudraksh to stop the car.

They both run towards Mahima to save her from the ongoing traffic, while Yuvraj comes there at the right time and saves Mahima from getting injured.

Preesha hugs Mahima and starts questioning her. Mahima acts like she doesn’t remember anything and doesn’t know how she got out of the house.

Elsewhere, Amma and Appa get worried to see Mahima being not there in the house. They make a call on Mahima’s phone and Rudraksh receives it.

© Copyright tellybest.com, 2020, 2021. All Rights Reserved. Unauthorized use and/or duplication of any material from tellybest.com without written permission is strictly prohibited.
Cached Saved on: Tuesday 8th of June 2021 11:47:49 AMCached Disp on: Wednesday 16th of June 2021 07:13:37 AM