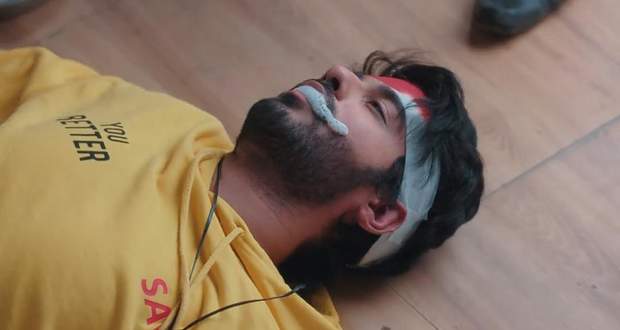 Today's Yeh Hai Chahatein (YHC) 27 Jan episode starts with Yuvraj going downstairs and pushing Rudraksh away from Preesha which causes a fight between the two.

Suddenly, the police come there and ask Preesha who is troubling her to which she takes Rudraksh's name.

The police are taking away Rudraksh while the Khurana's come there and Balraj asks the police why they are arresting Rudraksh.

The inspector tells him that Preesha got him arrested as he has broken the law by going near Preesha even though he has a restraining order.

Sharda begs Preesha to take back the complaint against Rudraksh but she declines while Mahima berates her.

Yuvraj takes him inside and the police go with Rudraksh.

At the police station, the inspector tells Balraj that there will be a case again Rudraksh in the court as he has broken the law while informing them that he can't bail him today as the court is already closed for the day.

Rudraksh tells them to go home and that Preesha will get him out which angers his family members and they leave.

Elsewhere, Saaransh cries and demands Preesha to bring back Rudraksh while she tries to talk to him.

He accidentally hits her and Vasudha, GPS berate him for hitting his mother after which Saaransh hugs Preesha and apologises to her.

The police ignore Rudraksh and he starts hitting his head on the wall.

Preesha manages to convince a sad Saaransh to eat pizza while the police notice that Rudraksh had consumed sleeping pills.

He tells the inspector to call Preesha and falls unconscious after which he calls Preesha and informs her that Rudraksh has tried to commit suicide and wants her here.

She reaches the police station but the inspector says that he can't let her go near Rudraksh due to restraining order to which Preesha tells him to cancel the restraining orders amd let her meet Rudraksh.