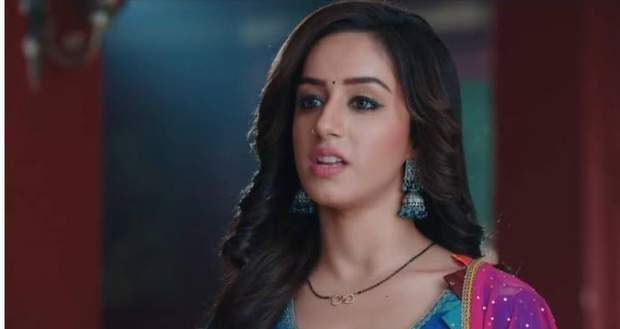 Mahima objects that Preesha can't do Sharda's check-up as her license is cancelled but Preesha reveals that her license has been given back to her.

Preesha and Sharda go to her room where Sharda questions her about planning something with Rudraksh.

However, Preesha denies it while Mahima listens to them from the stairs.

Later, Mahima fakes spraining her ankle and tells Rudraksh to pick her up in his arms and take her to the room.

At the same time, Mahima clicks a picture of them and shares it on her social media.

Preesha sees the picture of Mahima in Rudraksh's hands and gets angry at him.

She calls him and berates him while Rudraksh accidentally slips that Mahima came to his room at late night.

Preesha feels jealous of Mahima and tells him that they will go to Arjun's wedding tomorrow to get evidence against Mahima and expose her as soon as possible.

Next morning, Preesha tells Sharda that she has to take medicines while she glaring at Mahima.

Rudraksh feels scared that Mahima will see her angry and will know that something is going on.

Preesha and Rudraksh reach Arjun's wedding venue while the manager tells them that only the brides and grooms are allowed to enter due to the pandemic.

Rudraksh forms a plan and they dress up as bride and groom while the reporters see them and question them.

Mahima sees them on TV and wonders why he went to Noida.

Aahana asks Mahima where she is going and she lies that she is going on a lunch date with Rudraksh while Saaransh hears them.

Saaransh plans to hide in the car and reach Rudraksh.

© Copyright tellybest.com, 2020, 2021. All Rights Reserved. Unauthorized use and/or duplication of any material from tellybest.com without written permission is strictly prohibited.
Cached Saved on: Friday 30th of July 2021 12:54:14 PM