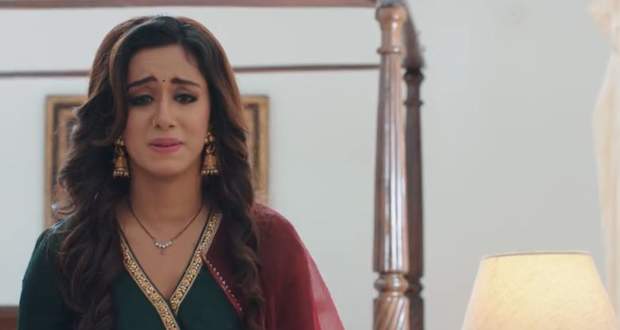 Today's Yeh Hai Chahatein (YHC) 29 Apr episode starts with Mishka asking for her share of the property from Sulochana.

Yuvraj comes there and tells Sulochana about talking to Preesha as Dr. Swami.

They plan to separate Rudraksh and Preesha.

Preesha decides to leave the house while Sharda stops her.

Rudraksh hurts himself by punching a punching bag hard.

Sonia asks him to stop and treats his wounds. They hug while Sulochana witnesses the scene.

She also witnesses Sonia blushing and confronts her.

Preesha and Rudraksh share emotional moments while Saraansh wishes to know where they are going.

Preesha makes an excuse and says they have to go to her parent’s house.

Saraansh wishes to take Rudra but he makes an excuse of working on his music.

Sharda tries to stop Preesha while Sulochana is pleased with her successful plan.

© Copyright tellybest.com, 2020, 2021. All Rights Reserved. Unauthorized use and/or duplication of any material from tellybest.com without written permission is strictly prohibited.
Cached Saved on: Monday 17th of January 2022 08:59:51 PM