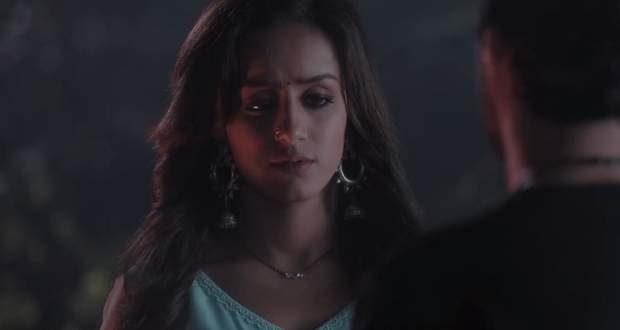 Today's Yeh Hai Chahatein (YHC) 2 Feb episode starts with Preesha telling Rudraksh to stay away from her, not to talk to her, and to not give an explanation for his deeds.

Rudraksh gives Preesha his jacket to save her from the cold but she does not accept it.

Further, Rudraksh lits Bonfire so that both of them could be saved from biting cold.
Rudraksh climbs up the tree to get fruits for eating while a snake comes.
Preesha tells Rudraksh to stop his breath, not to move and the snake will move away considering him to be tree's part.
The snake moves away and Rudraksh thanks Preesha and says that she still worries for him.
Further, everyone is worried and waiting for Rudraksh and Preesha at home.
Ahana says that Rudraksh and Preesha must have purposely gone together to make Mahima jealous of Preesha.
Mahima goes to her mother's house to search for Preesha while Vasudha and Gopal become surprised to see Mahima home at this point of time in the night.
Mahima wants to take Saransh along with her but Gopal and Vasudha do not allow her. So, Mahima understood that Preesha must have told them not to send Saransh with her.
Yuvraj meets Mahima while she is roaming around and thinking something at her parent's home parking.
Mahima tells Yuvraj that your wife is roaming around with Rudraksh while it doesn't make much difference to him.
Mahima says that she understands that Saransh is Rudraksh and Preesha's weakness and she will definitely take Saransh along with her today's night.
Meanwhile, Preesha goes to the lake to drink water while Rudraksh stops her that there could be some sort of water snake or poisonous insects in the water.
Preesha says she is feeling very thirsty and the water is clean so she will definitely drink water.

Upcoming Yeh Hai Chahatein episode update: Preesha to be attacked by a crocodile.