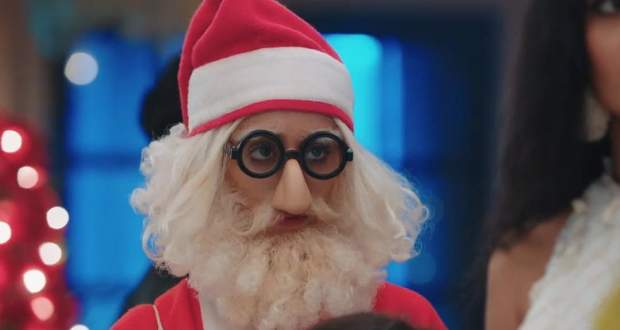 Today's Yeh Hai Chahatein (YHC) 2 Jan episode starts with Preesha telling Sharda how and why she came through the bathroom window.

Preesha is about to leave while Saaransh hugs her and requests her to come home for Christmas.

Later, Saaransh is in the Rudraksh's room while Mahima comes there and tells to go to his room sleep.

However, Saaransh says that he will sleep with Rudraksh after which Rudraksh tells her to go to her room and shuts the door on her face.

Next day, Mahima goes to Preesha's house and invites GPS to her Christmas party the same night.

GPS tells her that it has been awkward the past few days and that he doesn't wish to come to the Khurana house.

Mahima gets furious and tells him that he would have done it if Preesha had asked him and says that he love Preesha more than her.

Yuvraj and Preesha stand up for GPS after which Mahima leaves and calls the party planner to arrange for a Santa.

Yuvraj decorates the house while Preesha tells him to stay fake husband only and leaves.

Preesha goes to a costume shop and buys a Santa costume.

Preesha changes into her costumes and leaves.

Elsewhere, Saaransh is waiting for Santa while the Santa comes with an electric car.

Saaransh realises that Preesha and hugs her which makes Mahima suspicious.

She asks Santa how she knew about an electric car being Saaransh's wish while Sharda says that she brought the car.

Preesha goes from there and gives the kids gifts while dancing with them.

Meanwhile, Rudraksh feels upset that Preesha is not answering his calls while Saaransh comes there and drags him towards Santa.

© Copyright tellybest.com, 2020, 2021. All Rights Reserved. Unauthorized use and/or duplication of any material from tellybest.com without written permission is strictly prohibited.
Cached Saved on: Saturday 23rd of January 2021 04:18:17 AM