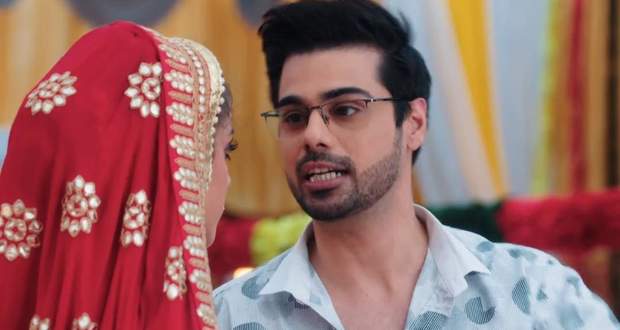 Today's Yeh Hai Chahatein (YHC) 30 Dec episode starts with Preesha standing near Rudraksh and telling him that she needs to talk to him.

Mahima asks him who is that girl and he lies that she is Gulaboo, a fan of him.

Rudraksh tells Mahima to do the media's interview and goes with Preesha.

She tells him that Saaransh is stuck in the trunk of Mahima's car and tells him to get the car keys from Mahima somehow.

Rudraksh manages to get the car keys from Mahima's purse and comes outside to free Saaransh.

Rudraksh and Preesha bring out an unconscious Saaransh and Rudraksh gets hysterical.

Preesha does CPR and other procedures and manages to get Saaransh to wake up.

Rudraksh goes inside and puts the keys back in Mahima's purse and starts greeting the couples in hopes to find Arjun Varma.

He further goes outside as a bride meets him and introduces her husband, Arjun Varma to him.

Meanwhile, Mahima sees Preesha and Saaransh and goes near them.

Preesha starts berating her on her lack of skills to be a mother while Mahima suddenly asks her how she knew that Saraansh was in Noida.

Preesha fails to answer her question but suddenly Yuvraj comes there and says that they tracked Saaransh's phone to get the location.

Yuvraj praises Preesha saying she is still taking care of Saaransh even though he is her child.