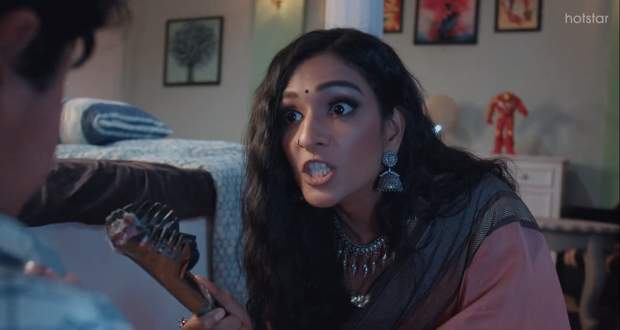 Mahima, Saransh, and Sharda are sitting at the dining table to eat breakfast while Sharda asks Mahima that why Saransh is looking tired and not eating anything.
Mahima tells Sharda that he didn't sleep properly at the night, she will give milk to him and make him sleep.
Vasudha and Gopal are very much worried about Saransh, they enquired at Preesha's Hospital and not get any news about Saransh.
Gopal calls Mahima to which Sharda picks up the phone and informs Gopal that Saransh is with them and Mahima brought him at the night.
Aahana asks Mahima that how come Saransh is at their home while Gopal comes and replies that Mahima kidnapped him.
Mahima gives an explaination that Saransh called her at the night to take him along as he is getting bored.
Gopal says that Saransh is happy at their home and asks Saransh about the reality.
Saransh remembers the torture and threats given to him by Mahima that he will say what Mahima tells him to say and not take Preesha's name in front of anyone.
Yuvraj gets surprised by Saransh reply that how could Mahima make a child speak lie.
Meanwhile, Rudraksh comes and Sharda gets worried about him seeing his wound's dressing.
Rudraksh gets shocked to see Saransh at their home and asks Saransh in person what he wants.
Saransh replies the same way Mahima told him to say while Rudraksh asks Mahima what did he do to Saransh.
Mahima confronts Rudraksh that she is his mother and never do anything bad to him.
Balraj asks Gopal whether he has to say anything else to which he says no and goes back to his home while Balraj confronts Rudraksh
Meanwhile, Vasudha gets worried to see Preesha in this condition but Preesha enquires about Saransh.
Preesha is not able to believe that Mahima took Saransh along with her.

Upcoming Yeh Hai Chahatein episode update: Balraj to change his will due to Rudraksh behavior.

© Copyright tellybest.com, 2020, 2021. All Rights Reserved. Unauthorized use and/or duplication of any material from tellybest.com without written permission is strictly prohibited.
Cached Saved on: Wednesday 28th of July 2021 02:39:03 PMCached Disp on: Wednesday 4th of August 2021 06:05:07 AM