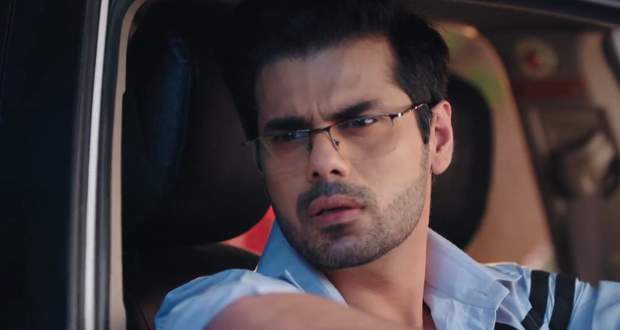 They dance together while Aahana and Mishika taunt Mahima that Rudraksh and Saaransh are stuck to Santa.

Mahima goes towards the Santa but Sharda drags her away towards a guest.

Meanwhile, a servant informs Rudraksh that a Santa is waiting outside asking for entry.

Preesha gets confused as she had already sent back the Santa that party planned arranged.

They go outside to meet the second Santa and find out that he is Yuvraj.

Yuvraj says that he followed Preesha and found out her plan after which he decided to come to the Khurana house to help.

However, Rudraksh tells him to leave when suddenly Mahima comes there wonders why there are two Santas.

Rudraksh makes an excuse that the party planner accidentally did a double booking.

Mahima insists to bring both the Santa's inside as the kids will be happy and take Yuvraj inside.

Later, seeing that Mahima is busy with the guest, Rudraksh takes Preesha to another place.

They share a romantic moment while Preesha says 'I love you' to him and confesses her feeling for him.

They dance under the mistletoe while Rudraksh asks her for a kiss.

Later, they share a kiss while Mahima looks for Rudraksh.

© Copyright tellybest.com, 2020, 2021. All Rights Reserved. Unauthorized use and/or duplication of any material from tellybest.com without written permission is strictly prohibited.
Cached Saved on: Saturday 16th of January 2021 02:45:11 AM