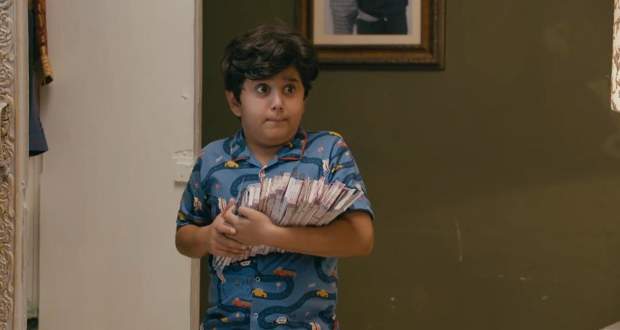 Sharda tries to calm Balraj. Balraj threatens to send him to jail while Saraansh jumps off the window.

Sharda takes Preesha with her and reaches Saraansh's unconscious body. Preesha takes him to the hospital while Sharda informs others about it.

Mahima overhears them and blames Balraj for Saraansh's condition. They go to the hospital while Aahana and Mishka stay back.

Sharda, Balraj, and Mahima leave for the hospital while the doctor informs Preesha that Saraansh's condition is critical.

Preesha wonders about Rudraksh's whereabouts while Vasudha reaches the hospital with Gopal on a stretcher.

Yuvraj calls Mahima and finds out that Saraansh is in hospital. Sharda, Balraj, and Mahima reach the hospital.

Preesha asks them about Rudraksh and Sharda replies that he may have gone on a late-night drive.

The doctor informs Preesha that Saraansh needs blood for surgery and asks who is his mother.

Both Preesha and Mahima address themselves as his mother. Preesha corrects herself and says that Mahima is the mother.

The doctor tells them both to do a blood test and says that they will take the blood which matches with Saraansh's.

The doctor informs Preesha and Mahima that their blood does not match Saraansh's and that they need blood immediately to start the surgery.

Preesha says that Rudraksh's blood will match and call him but doesn't get a response.

© Copyright tellybest.com, 2020, 2021. All Rights Reserved. Unauthorized use and/or duplication of any material from tellybest.com without written permission is strictly prohibited.
Cached Saved on: Thursday 28th of January 2021 04:14:03 AM