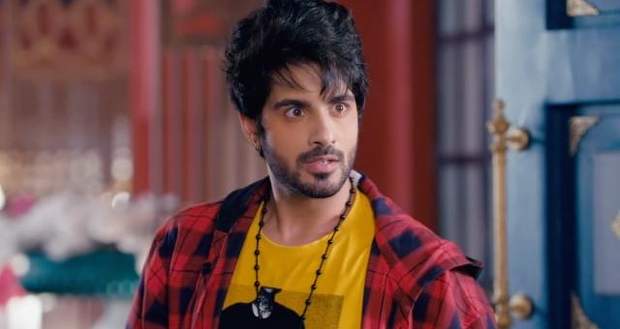 Preesha calls her father to know what happened and Gopal tells that Saransh himself accepted that he called Mahima.
Preesha is not able to believe and thinks that Mahima must have been done something to Saransh.
Balraj asks Rudraksh to tell what's the matter and why he purchased the hospital with his hard-earned money.
There is a hot fight between Rudraksh and Balraj claiming who was responsible for earning money.
Balraj says he arranged all of Rudraksh's concerts and ads and he taught him how to sing while Rudraksh telling Balraj that he is a loser singer.
Rudraksh says very arrogantly that without him Balraj wouldn't have been able to stand his business Empire and earn even a penny.
Mahima takes Preesha's name in between to which Rudraksh scolds her that she is clever not Preesha.
Balraj holds Preesha responsible for Rudraksh's mad behaviour that she left him and married his lover.
Rudraksh tells Balraj not to take Preesha's name and Balraj says that he can even kill Preesha.
Rudraksh says he will forget that he is his father to which Balraj slaps Rudraksh. Rudraksh becomes mad in anger, pushes Balraj and he falls down.
Balraj feels very disheartened and Rudraksh's mother tells him that today he has slapped his mother.
Mahima stops Rudraksh and Rudraksh is about to slap Mahima to which Mahima says that Saransh is there.
Further, Balraj apologizes to Sharda that he humiliated her whole of his life and he realized today that how one feels when Rudraksh disrespected him.
Sharda says that she accepted him whole-heartedly while Mahima instigates Balraj against Rudraksh and Preesha.
Balraj decides to change his will from the name of Rudraksh to Saransh. Mahima gets happy that she will own everything from Saransh and wants no one else to come in between.
Saransh is crying holding Preesh's photo and terrified to recall what happened today.
Meanwhile, Preesha calls Saransh and he is about to tell everything but Mahima takes the phone from him.