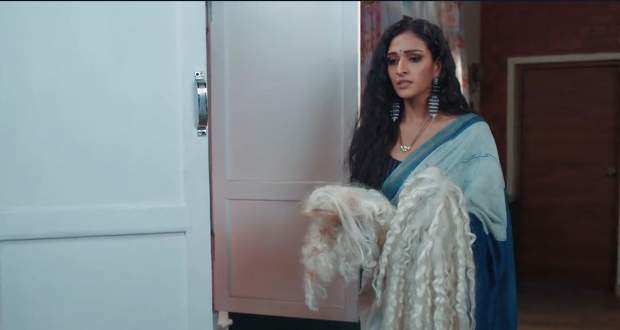 Preesha looks the other way and puts the fake beard and nose on while Mahima asks Rudraksh why he was kissing Santa.

However, Rudraksh says that there was something in the Santa's eye and he was checking it while Preesha uses a Punjabi accent and supports his words and leaves.

Mahima still believes that she saw them kissing and calls Yogesh, the party planner.

He informs her that the Santa he sent is a man that he only sent one Santa.

Mahima and Yuvraj leave the Khurana mansion while Mahima gets suspicious of Santa and wonders why Rudraksh lied to her about double booking.

Later, Yuvraj puts the Santa costumes in the closet and leaves to have dinner.

Next morning, Preesha and Yuvraj leave for work while Mahima goes to Yogesh's office and finds out that the Santa sent by them did not enter the Khurana house but a lady Santa.

Mahima thinks that it must have been Preesha and goes to her house to gain evidence.

She sees two wigs in her closet and realises that both Preesha and Yuvraj came to Khurana house in Santa's disguise.

She gets suspicious that they are working with Rudraksh and take the costumes with her.

Meanwhile, Rudraksh comes to Preesha clinic and romances with her.

She gets a call from Mahima which worries them as she picks up the call.

Mahima invites her and Yuvraj to Khurana house while Rudraksh tells Preesha that it might be a trap.

© Copyright tellybest.com, 2020, 2021. All Rights Reserved. Unauthorized use and/or duplication of any material from tellybest.com without written permission is strictly prohibited.
Cached Saved on: Saturday 16th of January 2021 01:20:47 AM