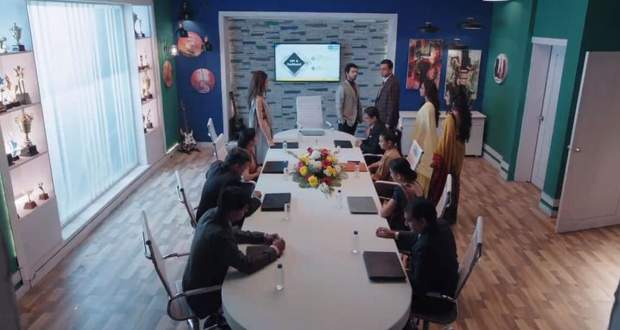 Today's Yeh Hai Chahatein (YHC) 6 Feb episode starts with Mahima taking the phone from Saransh, reminding him that she will kill Rudra and Preesha if he will talk to them again.

Mahima tells Preesha that she is Saransh's biological mother having his legal custody and she can't meet Saransh without her permission.

Yuvraj is about to tell Preesha about Mahima but stops after getting money in his account while Preesha sees a message on his phone.

Preesha inquires about money to which Yuvraj replies he has done some investment before and doing the clerk's job for passing his time.

Meanwhile, Balraj signs legal papers to transfer all property to Saransh while Sharda tells him to think again to which Balraj replied it was Rudra who started at first.

Balraj gets a call from the Board of directors Mr. Malhotra, he gets shocked and replies Rudra must have forgotten to tell him about the meeting.

Balraj looks for Ahana, the maid tells him that she has left. Balraj and Mahima leave for the meeting.

Sharda calls Preesha and pleads with her to go to the meeting as Rudra may not do something wrong to which Preesha says she is no more part of the family but she finally agrees.

Further, Guards don't let Balraj enter the office as instructed by Rudraksh to which he says he is the owner of the company but in vain. Preesha enters and Balraj asks why is she there, it's all happening because of her.

Rudraksh tells members of the Board that he is the owner and the company runs on his singing, so he will handle the company and will show more profits.

Ahana interrupts to which Rudra says she can resign if she has some problem and board members vote for him.

Preesha threatens guards to call the police and guards let them go inside. Balraj gets shocked to know Rudraksh as the new owner of the company.

Balraj asks Ahana if she supported him to which she says that she is helpless and thinks when Balraj favored Mahima over her, why should she bother.

Preesha confronts Rudra for his wrong act and says he fell even more in her eyes while Rudraksh says he did it for her and Preesha replied that she is not part of his sins.

Preesha reaches Khurana House thinking of taking Saransh with her, but guards don’t let her in.

Mahima threatens Preesha to call the police if she doesn’t leave and Preesha finally walks away.