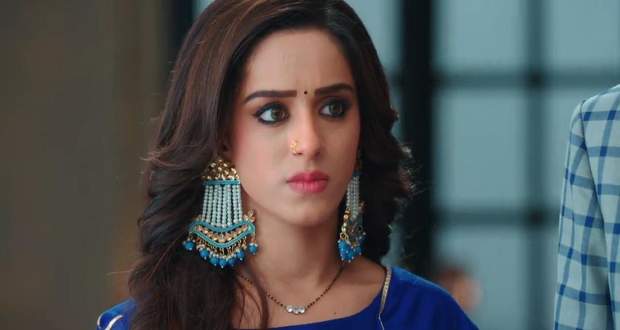 Today's Yeh Hai Chahatein (YHC) 6 Jan episode starts with Rudraksh assuring Preesha that they will face anything Mahima does together.

Elsewhere, Mahima calls everyone together while Preesha and Yuvraj enter the Khurana mansion.

Aahana asks Mahima why she invited them to Khurana house while Rudraksh comes there and berates her.

Mahima reveals to everyone that Preesha and Yuvraj had come to the Christmas party disguised as Santa's.

Rudraksh says that it cannot happen while Preesha accuses him of helping her by telling her that there was a double booking.

Rudraksh makes an excuse that he honestly didn't know that they were disguised as Santa and demands her to not accuse him.

Mahima threatens Preesha of calling the police if she doesn't accept her crime.

Aahana and Mishika accuse Preesha of stealing from the Khurana house while Preesha tells Mahima that she is falsely accusing her.

She says that she did dress up as Santa but to go somewhere else and not at Khurana house.

She shows everyone a video of her and Yuvraj dancing with the kids at the hospital dressed as Santa's.

A flashback shows Preesha and Yuvraj going to the hospital and dancing with the kids of the hospital to gain evidence that they were there during the Christmas party.

Later, Rudraksh berates Mahima for calling Preesha there and accusing her without any evidence.

Mahima thinks what happened while Rudraksh gets a message from Preesha to meet her at the outside of Khurana mansion at midnight for further planning.

© Copyright tellybest.com, 2020, 2021. All Rights Reserved. Unauthorized use and/or duplication of any material from tellybest.com without written permission is strictly prohibited.
Cached Saved on: Thursday 28th of January 2021 05:09:37 AM