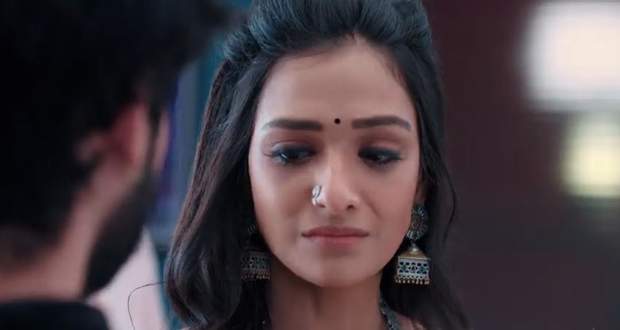 Rudraksh and Vasudha reveal to her that GPS suffered a heart attack, while Rudraksh tells her that he was with her parents throughout the night.

Further, Rudraksh asks Preesha about the reason to be in the hospital and Preesha informs him about Saransh's accident.

Yuvraj gets information about Saraansh from the reception and goes there to see him.

Meanwhile, Mahima reveals to Rudraksh that Balraj threatened Saransh to send him to juvenile prison and that's why he jumped from the window out of fear.

Rudraksh confronts Balraj, while Mahima threatens Balraj that she will file a case against him.

Further, she confronted Rudraksh saying that she came back for her son but didn't force him to go back with her.

She tells Rudraksh that she dropped her plan to take back Saransh on seeing Preesha and his love for Saransh.

She states that she will take away Saransh as Balraj is the cause for the state he is in.

Later, Yuvraj comes there and says that all of them are the reason to be blamed for Saransh's condition.

He further reveals that Saransh stole the money to give it to Mahima so that she leaves the Khurana house.

The nurse asks Preesha if Saransh's father has arrived as Saransh needs to be operated. Rudraksh goes with the nurse, while Mahima reveals to Balraj that Saransh is her and Rajiv's son.

She accuses him of ruining her life by denying Rajiv to marry her years ago. Sharda asks Preesha why they didn't inform them earlier to which Preesha replies that Rudraksh decided to not to tell anything.

© Copyright tellybest.com, 2020, 2021. All Rights Reserved. Unauthorized use and/or duplication of any material from tellybest.com without written permission is strictly prohibited.
Cached Saved on: Saturday 23rd of January 2021 04:29:47 PM