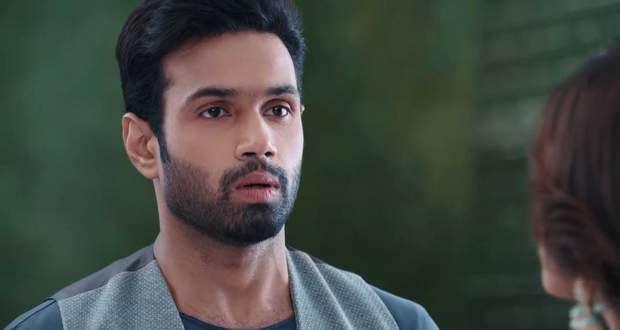 Rudraksh praises her for fooling Mahima while Preesha tells him that they need to expose Mahima soon.

He remembers that Arjun Varma may have returned and called him but Arjun doesn't pick up the call.

Elsewhere, Mahima wonders about the Santa situation while she plans to go to Rudraksh room to get close to him.

She gets confused not seeing him and learns from a maid that he has gone jogging.

She goes out to look for Rudraksh and gets suspicious seeing Preesha's car.

However, she gets surprised seeing Yuvraj and Preesha in the car and tells them to leave.

A flashback shows Yuvraj spotting Mahima and going into the car.

Next morning, Rudraksh and Preesha reach Arjun's home and tell him that he has come to Khurana house the next day to expose Mahima's true nature to the whole family.

Later, Preesha enters the Khurana house while Aahana and Mishika start insulting her.

Preesha says that she has come there to expose a liar and states Mahima is that liar.

Rudraksh puts up an act of supporting Mahima and fighting with Preesha while she says that Mahima was never admitted in a mental hospital.

She further reveals that Mahima burned down the mental hospital and that she is a con artist who traps rich guys for their money.

Mahima denies all accusation while Preesha states that she has a living proof and calls in Arjun Varma.

Preesha tells Arjun Varma to speak up about Mahima but he acts confused and asks her what he should say.

Arjun says that he doesn't know her and says that Preesha called him here to lie about Preesha in exchange for Money.