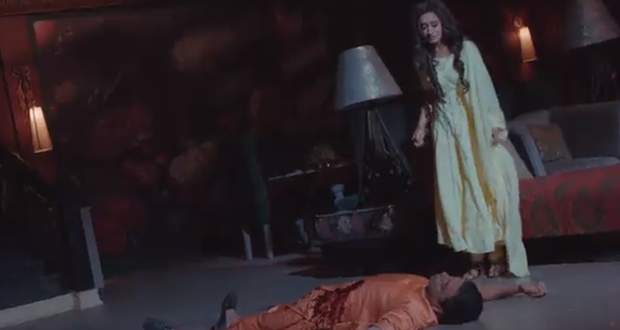 The episode begins with Preesha entering the Khurana house to meet Saransh.

Preesha sees Saransh crying at the corner of the house and asks him why he is crying then he shows Balraj to her.

Preesha checks Balraj's pulse, finds him dead, and she calls for Rudraksh and Sharda.

Mishika, Ahana, and Mahima come outside by Preesha noise.

Mahima asks who allowed Preesha to enter the home. Guard comes and says that Preesha must have entered from another Gate.

Preesha informs that Balraj is not alive, Ahana gets shocked while Mahima starts crying and says who could do that.

Meanwhile, Yuvraj gets up and wonders where Preesha could go at this time.

Yuvraj wakes up Vasudha and Gopal and asks about Preesha.

They scold him for waking them up and say that Preesha must have gone to meet Saransh. They all go to the Khurana mansion.

Mishika calls for an ambulance but Preesha says it's of use as Balraj is dead. Mahima doubts Preesha for killing Balraj to which Preesha says why would she kill Balraj.

Saransh cries and tells that he saw that momma didn't murder his grandfather but was killed by someone else while Mishika calls the police.

Sharda wakes up and wonders where could Balraj go at this time. She comes outside, gets dumbstruck to see Balraj lying on the floor and tries to wake him up.

Preesha informs Sharda that Balraj is no more to which Sharda slaps her, cries, and gets faint.

Police investigate everywhere and found no murder weapon while Preesh tells them everything she saw.

Police say that they need to ask Saransh to know about the truth.