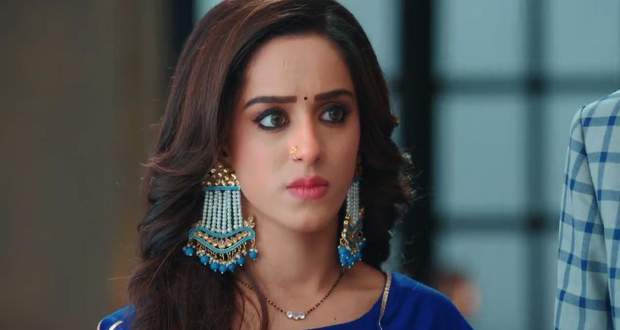 She gives him the address and threatens him to kill both of them if he doesn't leave the city.

She plans to trap Rudraksh into confessing to the whole world that she is his wife and calls Chetna, the journalist to take her and Rudraksh's interview.

Elsewhere, Preesha looks through the diary and wonders how she can contact Gautam Sharma.

Preesha reveals to him that she, Rudraksh and Yuvraj are faking everything to expose Mahima's truth.

She tells him about the diary and he tells her that he has handled one of the cases of Gautam Shukla and may have his number.

Mahima tells Rudraksh about the interview with Chetna and tricks him into agreeing to it.

She calls the number and questions Gautam about Mahima and it turns out that he is the same person Mahima conned as Dhvani.

He agrees to give his confession exposing Mahima and tells her to come to Mumbai for the confession as he can't come to Delhi.

Preesha calls Rudraksh and informs him about Gautam agreeing to confess and reveals it to him that she has told GPS the truth.

Rudrakash tells her that he'll manage the interview and will come with her.

He reaches the airport and goes to Mumbai with Preesha.

They reach Gautam's place and gets his confession telling how Mahima trapped him in love and ran away after taking his money.

Upcoming Yeh Hai Chahatein episode update: Mahima to find out where is Rudrakash.