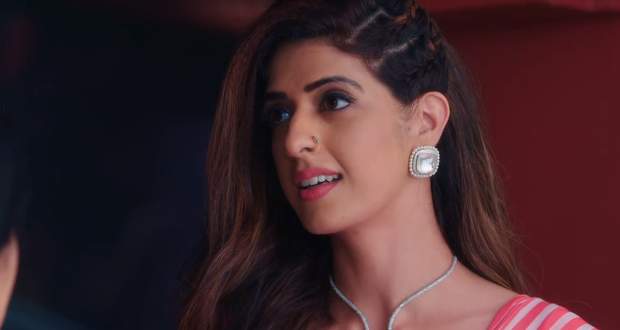 Preesha gets happy to have completed 14 days and decides to meet Saraansh first. She is surprised by the arrival of Vasudha and GPS while Saraansh reveals it was Rudraksh’s idea.

Saraansh tells GPS and Vasudha about Preesha living in servant’s quarter and Rudraksh bringing her inside. Ahana taunts Vasudha and GPS while Vasudha asks Ahana to take her to the restroom.

Vasudha confronts Ahana about the necklace worn by Mishka in their school video. They get into an argument and Ahana starts shouting. Preesha tries to calm them while asks Ahana to not misbehave with her mother.

Later, Preesha joins work in the hospital and meets her patient Neerja. She checks her and asks her to get tested in the next visit. Meanwhile, Ahana receives a call from the school principal.

She asks the principal to keep the admission on Saraansh on hold. Later, Rudraksh and Preesha decide to talk to Ahana about the admission. Ahana informs them that Saraansh’s admission is canceled.

Ahana tells Preesha that Saraansh has to give a test as the waiting period is over.

Upcoming Yeh Hai Chahatein episode update: Saraansh is given a tough test and Ahana makes sure he fails the test.