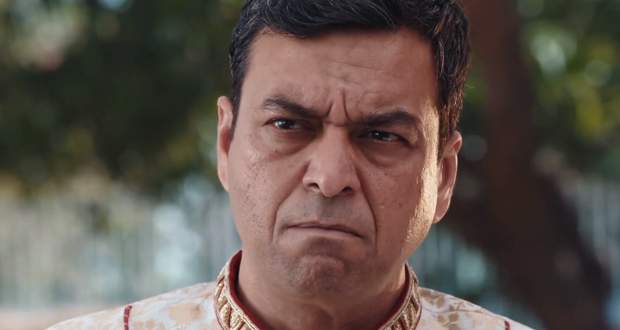 Today's Yeh Hai Chahatein 12 Mar episode starts with Preesha waiting for Rudraksh to apologize. Yuvraj comes there and accuses her of changing because of Rudraksh’s money.

He says she is dressed in royalty and money and asks her to leave with him. Preesha explains she can’t come along with him as Rudraksh has Saraansh’s custody.

Balraj gets mad at Shardha for giving the necklace to Preesha. They witness Saraansh going out with Rudraksh and follow them out. Elsewhere, Yuvraj asks Preesha for a hug and steals the necklace.

Balraj and others walk out of the hall to witness their hug. Balraj gets angry at Preesha while Ahana insults her. Saraansh steps up for his mother and later asks Rudraksh to support Preesha.

Ahana acts of recognizing Yuvraj and removes his beard to expose him. Balraj slaps Yuvraj multiple times and talks rudely with Preesha as well.

Vasudha and Gopal arrive and defend their daughter Preesha. Gopal gets mad at Yuvraj for coming there while Preesha is accused of getting him inside the house.

Ahana asks Preesha about the necklace and is accused of being careless as well. Ahana sees the necklace in Yuvraj’s pocket and blames Preesha for giving it to someone.

She asks Yuvraj to empty his pockets while Preesha takes his side. Ahana takes out the necklace from Yuvraj’s pocket leaving everyone in shock.