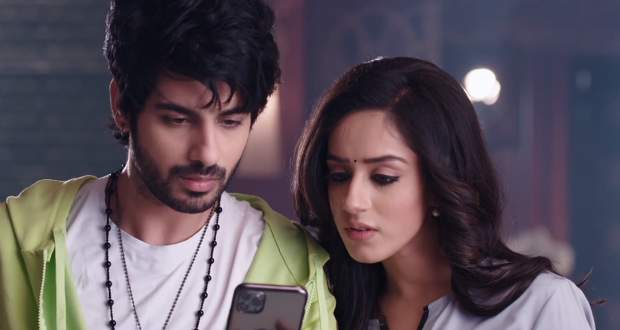 Rudraksh comes into the room and makes fun of Preesha’s wound. He further enjoys with Saraansh and leaves after a while. Later, Preesha wakes Rudraksh up and asks him to wake Saraansh up in the morning.

Rudraksh forgets to wake up Saraansh while Saraansh is missing from the room. At the same time, they find a letter from Saraansh stating he has gone for a drive.

Preesha and Rudraksh also receive a message from Saraansh saying he will not return until they stop fighting. Sharda also shows them Saraansh’s video giving them tasks to spend time together and share personal talks.

Meanwhile, Ahana and Mishka get ready for a school video. Ahana wants Mishka to wear a necklace and it should be properly seen in the video.

Rudraksh wants Preesha to give him in writing that she will not tell any secret to anyone. Meanwhile, Vasudha watches the video of Ahana and gets shocked to see Mishka’s necklace.

Preesha learns that Rudraksh is scared of lizards and she scares him even more. Saraansh receives a call from Sharda stating Preesha and Rudraksh are laughing.

Upcoming Yeh Hai Chahatein episode update: Saraansh is kidnapped by some woman while Preesha gets unconscious.

© Copyright tellybest.com, 2020, 2021. All Rights Reserved. Unauthorized use and/or duplication of any material from tellybest.com without written permission is strictly prohibited.
Cached Saved on: Saturday 23rd of January 2021 07:42:35 AM