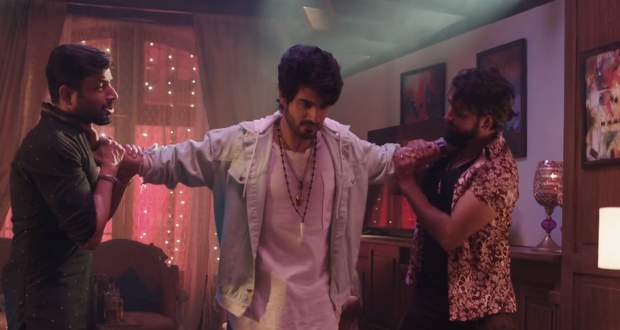 Today's Yeh Hai Chahatein 14 Mar episode starts with Rudraksh asking Preesha to show her moves on the dance floor. Two men at the dance club ask Preesha to come with them and give her money.

Rudraksh witnesses everything while Preesha asks for his help. They take her in a room and molest her while Preesha fights back and kicks one of them.

Later, Rudraksh arrives to rescue Preesha and beats the two men. Rudraksh and Preesha both beat up the men while later Rudraksh reveals he saved her just for Saraansh.

Preesha accuses him as well and also states they both are together just for Saraansh. Meanwhile, Balraj gets mad at Saraansh for touching his phone.

He holds his cheeks hard and hurts him. Ahana’s father, Niketan comes at the same time and asks Balraj to not hurt the small child. Further, Preesha and Rudraksh arrives and learn Balraj has hit Saraansh.

Further, Niketan thinks Rudraksh and Mishka got married and apologizing for not attending the wedding. Niketan enquires about Preesha while Balraj ignores the topic.

Later, Balraj asks Rudraksh to find a solution to Niketan’s problem as they will lose a lot of money if he learns Mishka didn’t marry him.

Preesha asks Saraansh to keep a distance from Niketan while Saraansh asks Rudraksh and Preesha to remain friends. Saraansh brings ice cream and asks Preesha and Rudraksh to get into a competition.

© Copyright tellybest.com, 2018 & 2019. All Rights Reserved. Unauthorized use and/or duplication of this material without written permission from tellybest.com is strictly prohibited.
Cached Saved on: Thursday 2nd of April 2020 02:49:09 PMCached Disp on: Friday 3rd of April 2020 04:29:12 PM