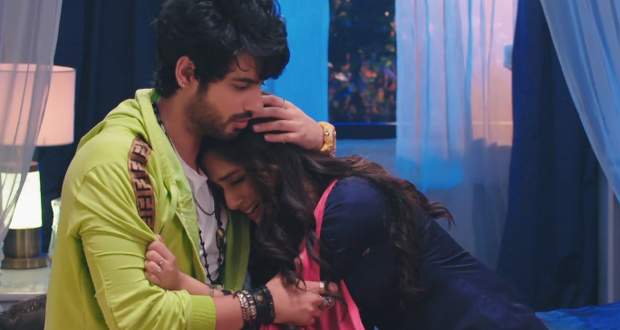 Today's Yeh Hai Chahatein 16 Jul episode starts with Sharda coming in Ahana’s room and asking about Saraansh. Ahana and Mishka come out of their room to see the drama.

Preesha starts crying while Sharda is also upset. Rudraksh tries to console Sharda and then follows Preesha. He tries to stop her from leaving the house.

Preesha falls unconscious and Rudraksh brings her inside. Niketan asks Rudraksh to take Preesha inside. Meanwhile, Vasudha is worried about GPS and at the same time, society members reveal that GPS has given them 5 lakhs.

Preesha gains consciousness and asks about Saraansh. Elsewhere, society members reveal that GPS had taken out society’s money from the bank which got stolen.

Vasudha learns that Saraansh is also missing and doesn’t tell Preesha about GPS. Later, the police arrive and questions the family members about Saraansh.

The police say that Saraansh might be kidnapped either for money or some personal grudge. Balraj learns about Saraansh going missing and talks against Saraansh.

He gets upset with Rudraksh for talking back to him. Later, Preesha imagines Saraansh and Rudraksh tries to console her. Sharda comes at the same time and suggests Balraj might be after his kidnap.

Sharda instigates Rudraksh against Balraj. Rudraksh agrees to Sharda and thinks Balraj might be the kidnapper.