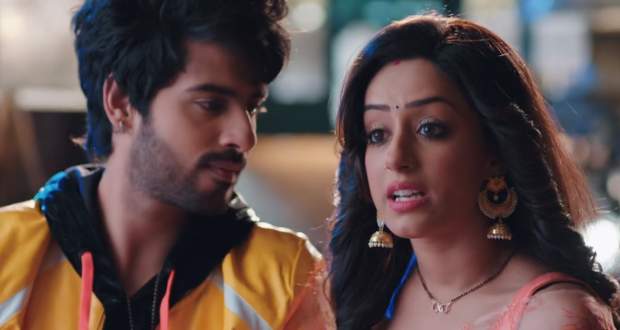 Today's Yeh Hai Chahatein 18 Mar episode starts with Vasudha asking Yuvraj to stay away from Preesha. Yuvraj tries to explain that he is just supporting them.

He further says he is feeling suicidal and requests GPS to get some work. GPS and Vasudha ask Yuvraj to leave and never return. Yuvraj while leaving learns that GPS is going to carry 10 lakh from the bank.

Rudraksh learns that some interviewer is coming to take his interview while Balraj learns he is suffering from a throat infection. Preesha offers to speak as a narrator for Rudraksh.

Niketan agrees with her idea and supports her. Rudraksh fears that Preesha will spoil his image as revenge. Later, GPS gets the money out of the bank but Yuvraj on a bike snatches the bag from his hand.

Preesha and Rudraksh meet the interviewer and Preesha start with torturing Rudraksh. Preesha answers the questions to create a good image of Rudraksh but praises herself.

Preesha answers each question with a hint of romance and tells the interviewer that she found Rudraksh in the dustbin the day after Bunty’s bachelor party.

She further says Rudraksh was searching her ring in the dustbin the whole night. The interviewer gets impressed with Rudraksh’s family-man image.

Preesha reveals that Rudraksh will also open an NGO and also loves Saraansh a lot. Preesha later reveals that a little boy wants him to sing for him.

Upcoming Yeh Hai Chahatein episode update: Rudraksh decides to give Saraansh love while later Saraansh is pushed by someone.