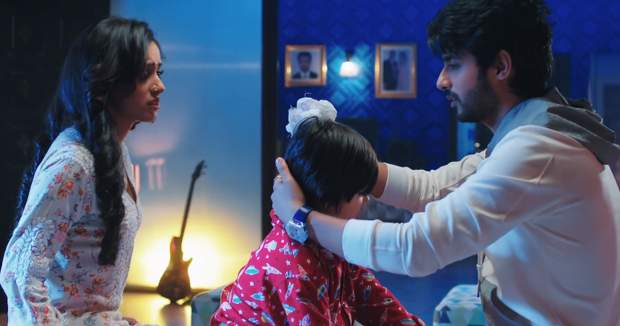 Balraj gets mad at Shardha for asking again and again about food while Preesha learns that he is lying about being in the conference as he was with Natasha.

Mishka and Ahana also leave for some charity event. Later, Preesha leaves her room while Balraj insults Shardha again. Meanwhile, Saraansh gets scared to not find Preesha near him.

Preesha consoles Shardha in the kitchen while Saraansh is pushed by some lady in the hallway. Preesha gets scared and wants to take him to the hospital while Rudraksh consoles her.

Rudraksh puts ice on Saraansh’s head while Preesha gets worried for him. Saraansh asks Rudra to sleep with him while Rudraksh decides to give him fatherly love.

Later, Preesha is jealous that Saraansh chose to sleep with Rudraksh rather than her. She further decides to find out who pushed Saraansh in the home.

GPS is worried about losing 10 lakh rupees but hides the truth from Vasudha. He wonders who knew about him having money. Meanwhile, Yuvraj is scared of GPs finding out about him stealing the money.

Niketan brings breakfast for Saraansh and praises Rudraksh for taking care of Saraansh well. He further asks Preesha to stay alert about Saraansh.