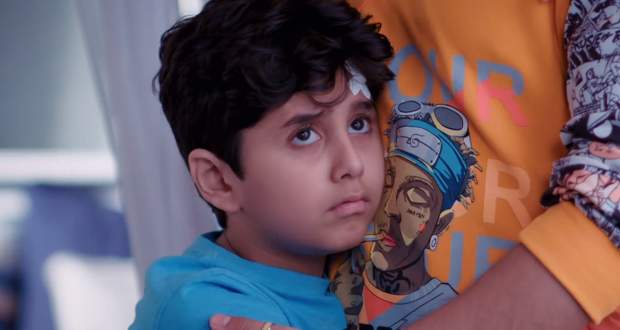 Today's Yeh Hai Chahatein 1 Aug episode starts with Rudraksh taking Preesha up in the room. Ahana offers to console Rudraksh in getting ready for the concert.

Ahana wants to get the whole property of Khurana’s. Meanwhile, Yuvraj creates a fuss over Rudraksh taking Preesha and Saraansh back in Khurana house.

He makes Vasudha and GPS believe that Preesha and Saraansh are not safe in that house. Later, Preesha reveals that she was acting of being ill to stop the fight.

Yuvraj gets successful in manipulating Vasudha who decides to get Preesha in her house. Meanwhile, Ahana offers chocolate milkshake to Saraansh and tries to be in their good books.

Vasudha comes at the same time and gets in an argument with Mishka. Ahana asks Mishka to apologize to Vasudha and takes her in Preesha’s room.

Vasudha meets Saraansh and Preesha while Yuvraj wants Preesha and Saraansh to come along. Rudraksh refuses to let them go while Yuvraj is adamant to take them.

Saraansh also refuses to go away from Rudraksh while Rudraksh apologizes to Vasudha. He also promises to take good care of Preesha and Saraansh.

Saraansh leaves with Rudraksh while Preesha tries to make them understand that Saraansh is happy. Vasudha agrees to her and asks her to stay there with Saraansh.

Saraansh is scared because of Niketan and shares the same with Preesha. Later, Saraansh watches Niketan shooting his mother again in the dream and gets scared.