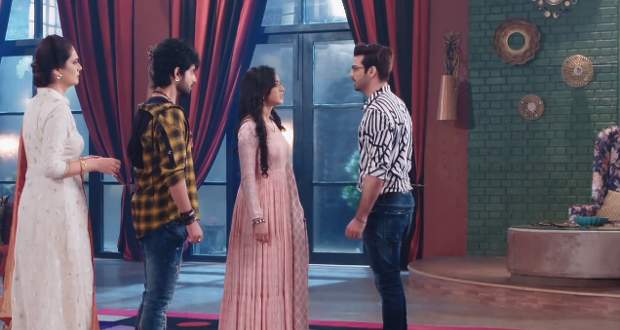 The family doesn’t know any Balraj Khurana and Preesha again gets upset. Meanwhile, Vasudha learns that GPS is in the city hospital.

Rudraksh decides to file a complaint in the police station. Preesha and Sharda try to stop him but Rudraksh is adamant to complaint against his father.

Yuvraj reaches Khurana house and asks about Saraansh. Rudraksh gets mad at Yuvraj while Yuvraj creates a scene and refuses to leave. Ahana also comes downstairs and humiliates Yuvraj.

Ahana points the incident of him stealing the necklace while Yuvraj counter blames them. Ahana further blames Yuvraj for kidnapping Saraansh.

Rudraksh and Yuvraj again get into an argument while Vasudha calls Yuvraj to tell about GPS. Preesha picks up the call and gets worried about her father.

Yuvraj calls Vasudha again and asks the name of the hospital. Yuvraj asks Preesha to come along with him while Rudraksh wants Preesha to go with him only.

Preesha asks Rudraksh to come along with them. Later, Preesha gets mad at Vasudha for not telling her the truth. Rudraksh uses his charm to get the room number of GPS.

They get the room number and Vasudha gets really upset to see GPS’s condition.