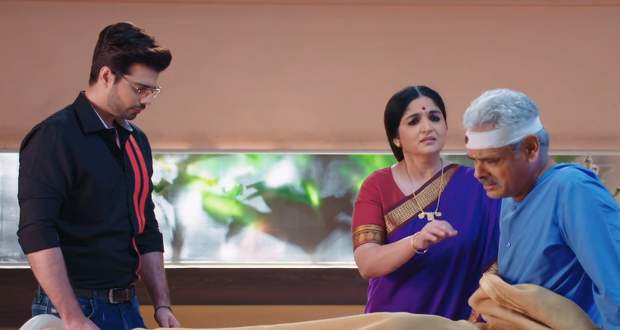 Today's Yeh Hai Chahatein 22 Jul episode starts with Preesha meeting GPS and asking about his accident. He says he bumped into something and went unconscious.

Vasudha asks Preesha to go home and search for Saraansh. Yuvraj offers to go with her while Preesha asks him to stay with her mother.

Shard asks if Rudraksh filed a complaint against his father and Rudraksh explains he didn’t want Saraansh to suffer. Meanwhile, the lady puts Saraansh inside the bed and covers it with a blanket.

Preesha gets worried after waking up and later witnesses Rudraksh praying in front of Goddess. He even takes an oath to leave flirting if Saraansh gets back safe.

GPS gets angry to see Yuvraj in the hospital while Vasudha praises Yuvraj in front of him. Yuvraj plays his trump card and reveals he has given the 5 lakh rupees to the society members.

GPS also gets impressed by him. Yuvraj calls Preesha and gets mad at her for not finding Saraansh yet. Yuvraj also suggests that some member of the Khurana family has kidnapped Saraansh.

He also states he will file a complaint against the Khurana family for kidnapping Saraansh. Preesha tells Rudraksh about the complaint and asks or help.

They decide to go to the hospital first and then go to search for Saraansh. Later, Preesha gets shocked to see Yuvraj not flirting with one of his fans.

© Copyright tellybest.com, 2018, 2019, 2020. All Rights Reserved. Unauthorized use and/or duplication of this material without written permission from tellybest.com is strictly prohibited.
Cached Saved on: Friday 30th of October 2020 02:00:43 AM