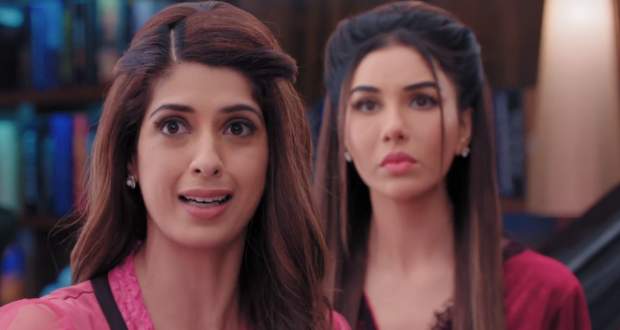 Today's Yeh Hai Chahatein 24 Aug episode starts with Preesha seeing a nightmare that Saraansh learned the truth about his identity. At the same time, Rudraksh reveals that his project is spoiled.

He further reveals that Mishka is the one to spoil his project. They all gather in the hall while Rudraksh shows Ahana the footage of Mishka spoiling his project.

Mishka arrives downstairs while Ahana slaps her and reveals everything is recorded in CCTV camera. She further breaks all ties with her and doesn’t let her speak.

Ahana continues to act of being upset with Mishka and wishes to throw her out of the house. Ahana asks Mishka indirectly to apologize to Rudraksh while Mishka follows her lead.

Rudraksh lets her stay while Preesha is suspicious of Ahana. Rudraksh appreciates Preesha for installing CCTV cameras as they got to know the truth about Mishka.

Preesha asks Mishka why she did it while Balraj gives the explanation. He says Mishka did it because of her as she stole Rudraksh from Mishka. He blames Preesha for everything while Rudraksh takes a stand for her.

Ahana apologizes to Mishka and explains her situation. Later, Preesha gets a new Simcard and calls Vasudha. She lies to her mother about changing the number.

Preesha further gives the new number to her patients and the hospital. She gets the message of the blackmailer again on the new Simcard. She calls the blackmailer and questions him but is unable to recognise his modulated voice.

She is ready to do anything to protect Saraansh from the truth. She decides not to tell Rudraksh anything.