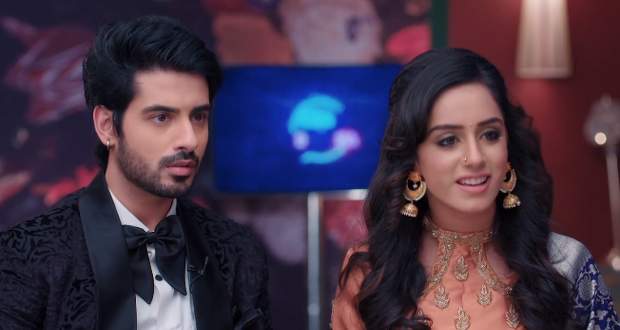 Today's Yeh Hai Chahatein 27 Aug episode starts with Yuvraj asking a man about completing their plan. He asks if he has cut the rope of the chandelier properly or not.

Chetna arrives in Khurana house while Rudraksh also arrives downstairs looking all handsome. Preesha comes downstairs and again receives a call from the blackmailer reminding her of his condition.

The talk show starts and Chetna praises both Preesha and Rudraksh. Chetna’s first question is about Rudraksh joining the school. Rudraksh reveals he is doing it just for Saraansh.

Rudraksh is sure that his fans will understand his efforts and decisions. He also praises Preesha for always supporting him. Meanwhile, Neerja wants to see the talk show while Rahul is not comfortable watching it.

Rahul asks Yuvraj about his plan while Yuvraj has planned to harm Rudraksh. Elsewhere, Chetna asks some questions from Preesha and Rudraksh about each other as part of the compatibility test.

Preesha tells Chetna that Rudraksh is scared of lizards while Rudraksh wishes to tell about his piercing. He doesn’t tell anything but at the same time, Preesha receives a message from the blackmailer.

Preesha continues to insult Rudraksh and even comments on the girls who are crazy for him. Rudraksh gets upset with her and wants to change the topic.

She further reveals that Rudraksh was with a lot of girls in the farmhouse and accuses him of using girls. She also states that she hates him while Rudraksh fumes in anger.