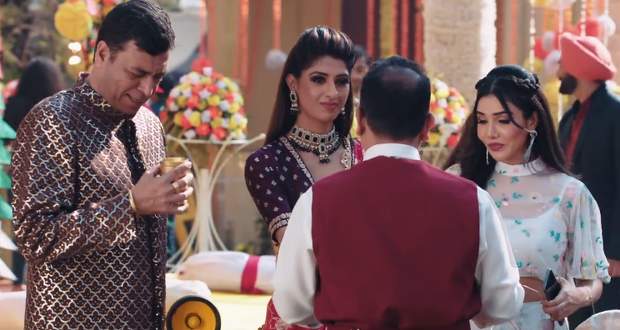 Today's YHC 29 Feb episode starts with Rudraksha asking Prisha to wear the dress. She wears the dress and Rudraksha gets mesmerized to see her.

Prisha accuses him of getting the wrong size of the dress while Rudraksha hugs her to check the size. Elsewhere, Balraj is upset with the boring party.

Ahana comes and reveals that she has got alcohol mixed in the Payasam. Everybody drinks the Payasam and even the south Indian guests start dancing.

Vasudha gets confused as to why her guests are acting drunk. She smells the Payasam and deduces that there is alcohol in it. She reveals that Mehendi function would not take place.

Vasudha gets really mad at Balraj and accuses him of betrayal in front of the media. Ahana tries to calm her down but she doesn’t stay quiet.

At the same time, Rudraksha arrives and handles the situation. He sends Ahana and her sister away and gives lemonade to everyone.

Later, Balraj insults his wife and calls her middle class for taking Prisha’s family’s side. Prisha finds Rudraksha’s mother crying and consoles her.

Yuvraj disguises as a Sardaar and reaches the Khurana mansion. The wedding planner asks Yuvraj to become the waiter at the party. Later, Prisha finds Saransh with inappropriate things and asks her to give them back.