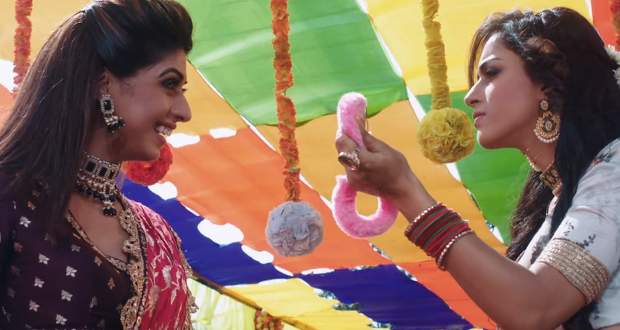 Today's YHC 4 Mar episode starts with Ahana getting shocked to see Saraansh’s free hand. She covers her actions by taking a picture with Saaransh.

Saraansh tells Preesha that Ahana had locked her on the bench. He says he had a plan and wanted to open the lock but the key fell off. Preesha confronts Ahana about locking her son.

Ahana asks her to be in her limit while Preesha warns her not to be near Saraansh again. Later, Bubbles and Bunty come to meet Preesha but Rudraksh suggests them not to marry as it isn’t a good decision.

Preesha and Rudraksha start fighting and Saraansh wonder how he can stop their fight. He remembers some punishment his teacher gave and locks their each hand using handcuffs.

Preesha asks Saraansh to open the lock while Saraansh is not able to find the key. Rudraksh asks him to find it while Preesha and Rudraksh are stuck with each other at the party.

They show they are in love in front of the media while Yuvraj is disturbed. Later, Rudraksha wishes to go to the washroom while Preesha is forced to go with him.

They accidentally switch the shower on and get wet. They start fighting again but later share a joke. Saraansh thinks his trick worked and joins them.

Preesha finds the key with him and asks if they can open it now that they have become friends.

Upcoming Yeh Hai Chahatein episode update: Yuvraj confronts Preesha while Ahana decides to use it as an opportunity.