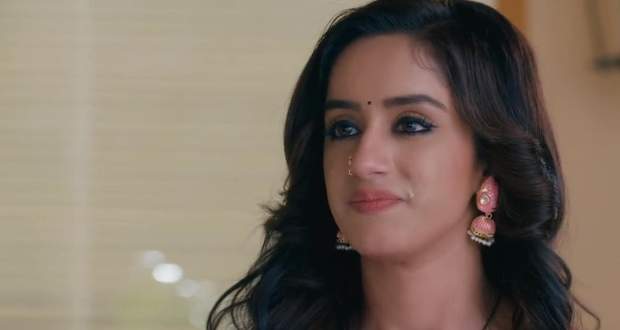 Today's Yeh Hai Chahatein (YHC) 5 Nov episode starts with Rudraksh requesting the security guard to get him inside the laboratory. He plans to disguise as a doctor and to enter the laboratory using the ID card.

Preesha reaches the hospital and Rahul asks her to save Neerja. She gets into the ICU and tries to calm down Neerja by talking to her.

All of a sudden Neerja stops breathing and this gives a huge shock to Rahul. Meanwhile, Rudraksh wears a PPE kit to hide his face and steals an ID card of the hospital staff.

Preesha shouts at the doctor to save Neerja and asks the nurse to get the crash card to give a shock to Neerja. Preesha tries to give shock procedures to Neerja and she somehow saves her.

Ahana and Mishka watch the CCTV footage of the hotel and finds out that Sharda met Keerti the last time.

Rudraksh gets into the laboratory and searches for Sharda’s DNA sample. A doctor comes into the room and tells Rudraksh that DNA reports have arrived.

Rudraksh gets a shock when the doctor informs him that Saransh is not Preesha’s son. The doctor tells Rudraksh that Preesha and Saransh’s DNA samples are not matched.

Rahul feels grateful to Preesha for saving Neerja’s life and even apologises to her for making her life terrible.

Rudraksh runs from the laboratory, while Sharda calls Preesha and informs her that Rudraksh went to the lab to help her.

Rudraksh tears Sharda’s DNA reports and thinks a plan to change the samples kept in the lab. Preesha searches for Rudraksh in the lab and he pulls her to talk to her.

Rudraksh tells her everything and Preesha decides to help him in destroying Sharda’s DNA sample.

© Copyright tellybest.com, 2018, 2019, 2020. All Rights Reserved. Unauthorized use and/or duplication of this material without written permission from tellybest.com is strictly prohibited.
Cached Saved on: Thursday 3rd of December 2020 08:16:31 PM