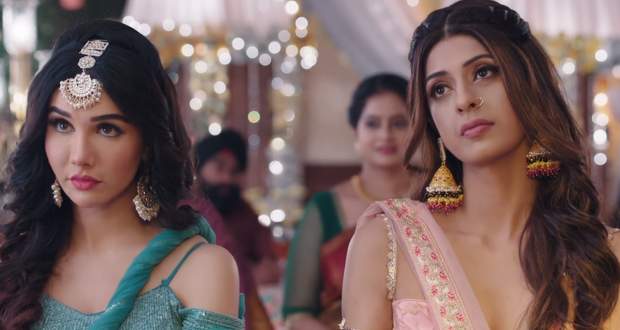 Today's YHC 6 Mar episode starts with Piya wanting to tell Bunty that she loves him. Meanwhile, the host arrives on the stage and welcomes the bride and groom.

She further says that first performance will be of Balraj and Shardha and they will compete with the Shrinivasans. Elsewhere, Shardha is scared to perform on stage while Balraj asks her to not come on stage.

However, she gets scared and stops in the middle. The host announces that Shrinivasans won the competition while Balraj gets upset. He leaves in anger while Rudraksh goes on stage and says he is proud of his mother for dancing so well.

The next performance is of Mishka and Ahana and they go in the room to get ready. Saaransh throws itching powder in the table fan to teach them a lesson.

Ahana and Mishka start their performance and later Ahana can’t stop itching. Saraansh starts laughing and everyone makes fun of them for falling down.

Rudraksh asks Preesha to come along for dance while Preesha is hurt. Ahana and Mishka arrive and Ahana suggests Rudraksh should dance with Mishka.

Ahana tells the host that Preesha won’t perform but at the same time, Rudraksh arrives with Preesha in his arms.

Upcoming Yeh Hai Chahatein episode update: Ahana plans to humiliate Preesha and sends Yuvraj in the same room as her.