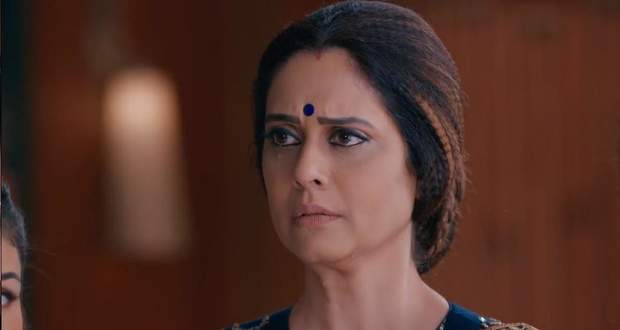 Today's Yeh Hai Chahatein (YHC) 6 Nov episode starts with Preesha and Rudraksh getting into the forensic lab together. The police and Mr Jain reach the hospital to get the DNA reports.

Preesha adds a chemical in Sharda’s DNA sample, while the police officer gets into the lab and asks for the reports.

Preesha and Rudraksh rush from there and reach home to assure Sharda that police will not arrest her. Sharda hugs both of them and they all get emotional.

Rudraksh feels grateful to Preesha for helping Sharda. Preesha says that they were able to save Sharda because they both were together.

She says that she can never think bad for him and will always be there to support him. Later, Police arrives at Khurana house to arrest Sharda for Keerti’s murder case.

They tell the Khurana's that Sharda’s DNA sample has matched to the skin present in Keerti’s nails.

Balwant takes a stand for Sharda and Mr Jain tells him that Sharda knew Keerti when she was a child. Sharda confesses that Keerti’s mother was her good friend.

The police tell everyone that they have got the CCTV footage of the hotel which clearly shows that Sharda met Keerti the last time on the terrace.

© Copyright tellybest.com, 2018, 2019, 2020. All Rights Reserved. Unauthorized use and/or duplication of this material without written permission from tellybest.com is strictly prohibited.
Cached Saved on: Thursday 3rd of December 2020 07:14:23 PM