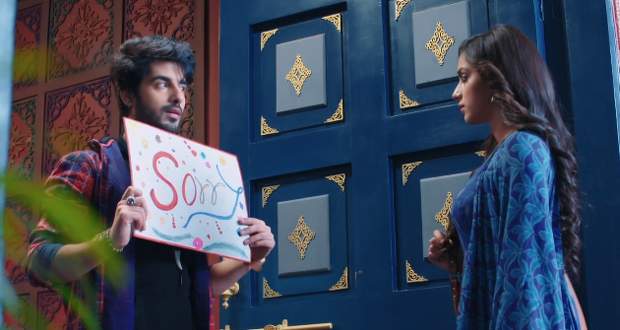 Today's Yeh Hai Chahatein 7 Aug episode starts with Ahana instigating Balraj against Preesha. Sharda wants to make sweets while Balraj gets mad at her for going against him.

Rudraksh feels guilty for hurting Preesha and is confused about his feelings. Saraansh asks for his help while Rudraksh explains his problem in front of him.

Saraansh gives him an idea to apologize to his friend. Rudraksh writes sorry on a placard and apologizes to Preesha. Preesha gets shocked while Rudraksh feels weird.

He asks her to stay in the servant’s quarter while Preesha agrees. Rudraksh isn’t happy with the whole situation while Ahana tries to instigate Saraansh.

Rudraksh threatens to leave the house and later learns Saraansh is outside servant’s quarter. He tries to console Saraansh while Sharda and Balraj also come there.

Rudraksh tries to entice Saraansh but Saraansh wants his mother to go with him. Rudraksh decides to do something for Preesha and Saraansh.

Upcoming Yeh Hai Chahatein episode update: Rudraksh wears a PPE kit and brings Preesha inside the house in his arms.