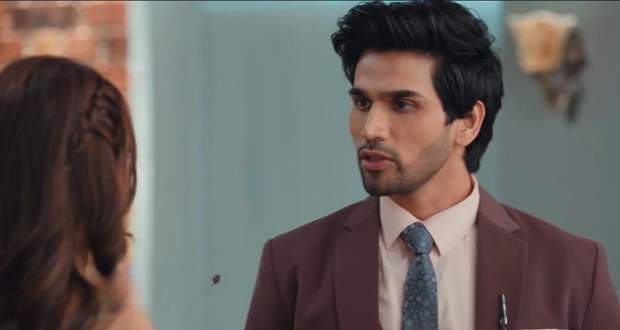 Today's Yeh Hai Chahatein 10th August 2022 episode starts with Roohi running into the garden and slipping while hitting her head.

Roohi gets injured on the head and falls unconscious while Preesha, Armaan, and her uncle arrive there.

Preesha kneels to Roohi and tends to her while Aryan speaks ill about Roohi saying that he will teach her a lesson if she comes inside their house again.

Preesha however scolds him and tells him to call the doctor while she takes her inside.

Rudraksh also follows Preesha worried for Roohi while Armaan stops him and tells him to stay back.

Further, Rudraksh calls Saaransh to tell him about Roohi and asks him to come to the Thakur house to look after her.

At the same time, Raj drops off Pihu and is talking to her while she notices Rudraksh talking on call and using an expensive phone.

Getting suspicious, Pihu walks toward the gardener while Raj realizes that the gardener is Rudraksh and tries to stop Pihu.

However, she tells him that she needs to know that the people working for her family are loyal and wise.

Back in the garden, Pihu questions Prem Chacha about the phone and demands to see his phone while Rudraksh pulls out a very old keypad phone.

Flashback shows, Raj messaging Rudraksh and warning him about Pihu.

Back inside the house, the doctor tells Preesha that Pihu doesn't have any major injuries but is unconscious because of the injury to her head.

However, if she doesn't wake up soon, they might have to refer her to a specialist which worries everyone.

Further, Rudraksh brings water and a herbal paste for Roohi while requesting Preesha to let him inside the room.

Preesha lets him inside while Armaan stands annoyed.

Later, Rudraksh requests Preesha to let him stay with Roohi until she regains consciousness and Preesha agrees.

Rudraksh feels grateful as he thinks that he brought chutney with the excuse of it being herbal paste to meet Roohi.

Suddenly, Roohi wakes up and fails to recognize Preesha which concerns everyone.

However, she sees Rudraksh and calls out to him while Rudraksh fears being exposed and keep up his act of not knowing Roohi.

Just then, Saaransh comes there and hugs Roohi but she pushes him away and hides behind Rudraksh saying that she doesn't know this boy.

© Copyright tellybest.com, 2020, 2021. All Rights Reserved. Unauthorized use and/or duplication of any material from tellybest.com without written permission is strictly prohibited.
Cached Saved on: Saturday 1st of October 2022 10:51:51 PM