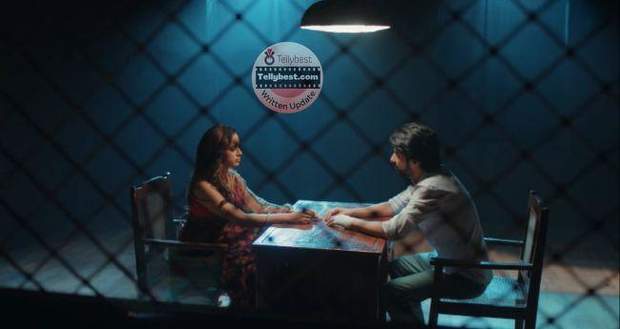 Ruhi asks Saaransh if they can tell everyone what happened but Saaransh shakes his head negatively.

In the morning, Rudra gets a call from the police station, and Ruhi hears it and prays to God to let Preesha get out of police custody.

At the police station, the officer monitoring Arman's murder case shows all of them a black dupatta found in Arman's room.

He also lets them know that Arman's murder happened around 3 AM as per the forensic reports and somebody tried to strangle him before killing him.

Pihu confesses that the dupatta piece is hers as it got stuck the day she sneaked into Arman's room to collect evidence against him.

However, the police state that Pihu could be Arman's potential murderer.

Pihu angrily says that the night Arman got murdered, she had cramps and went to the hospital along with Vidyut.

The police then show a coat button piece they found in Arman's room & ask everyone to identify it.

Digvijay stiffens up as if it is his but goes outside the police station with Pihu as a worried father for his daughter.

Once Digvijay reaches Khurana House, he quickly takes out the coat he was wearing at the party and sees one of its buttons pop out.

Before anybody suspects him, he tries to burn it but Pihu smells the burning and gets horrified when she sees Digvijay burning his coat.

She throws water on it and yells at Digvijay for killing Arman but Digvijay keeps denying it.

Pihu in a strained voice asks Digvijay why he didn't confess to the crime he committed when Preesha is in jail right now.

Just then, the police force arrives at the Khurana House to arrest Digvijay along with Rudra who says he saw Digvijay go inside Arman's room to talk to him.

In a flashback, Rudra is seen urging the police to check the CCTV footage as Arman did not scream or yell when he was being murdered, so it could be somebody close to him.

They all see Digvijay wearing the coat which has the same buttons in the footage.

The flashback ends and Rudra turns to Pihu & asks her why she didn't tell him prior.

Pihu justifies herself and states she just got to know this before he came and was about to come to him herself.

Digvijay emotionally says that it is true he went to talk to Arman but he did not kill him.

After Arman sent him the notice to leave the Khurana House & the business, Digvijay decided to go talk to him.

In a flashback, Digvijay is seen going to Arman's room & questioning him for his bad behavior.

Arman boasts about his business skills and instead, blames Digvijay for losing twenty crores.

He even calls Pihu's unborn baby an illegitimate child which angers Digvijay who threatens Arman to mind his tongue and slaps his face.

However, Arman grabs Chacha Ji's collar and pushes him against a window, before yelling at him to get out of his room.

During this tussle, the button of Digvijay's coat popped out.

The flashback ends while Rudra and everyone else seems confused.

© Copyright tellybest.com, 2022, 2023. All Rights Reserved. Unauthorized use and/or duplication of any material from tellybest.com without written permission is strictly prohibited.
Cached Saved on: Wednesday 25th of January 2023 01:44:22 PMCached Disp on: Wednesday 1st of February 2023 06:10:48 PM