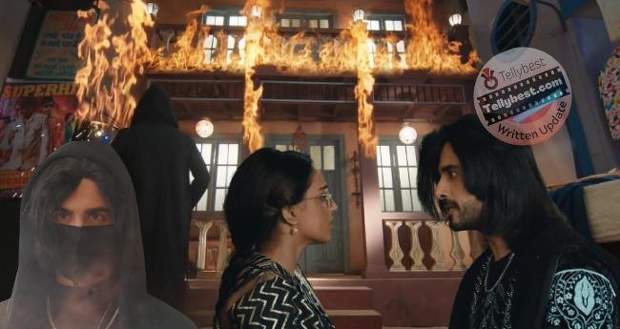 Today's Yeh Hai Chahatein 10th January 2023 episode starts with Sam seeing the girl pick up glasses while he realizes that they are the same ones that he had gifted Nayan.

Nayan wears the broken glasses again but realizes that they are broken and that she cannot see anything with them.

Meanwhile, Sam directs the fan towards Nayan and her Dupatta flies revealing her identity to Sam.

Further, Nayan sits in Mandap No. 7 where Rahul is sitting while Sam thinks that the groom is Mohit.

Meanwhile, Patti, Malti and Chintu watch Nayan's marriage through the live telecast and feel happy that Nayan is finally getting someone in her life.

Back at the marriage hall, Sam bribes an employee to throw Ghee on the groom in Mandap No.7 and bring him to the dressing room somehow.

The employee does as said and takes Rahul to the dressing room while signaling Sam.

On the other hand, Ishaani talks to Mohit and he agrees to let her talk to Patti while Chintu picks up the call.

He informs Ishaani about Malti's heart attack and Nayan getting married in the mass marriage.

Ishaani gets worried as she talks to Mohit and tells him that she has to stop the marriage as she knows Patti and Malti must have emotionally blackmailed Nayan.

Mohit tells her to calm down and suggests calling Nayan first.

Meanwhile, Sam hits Rahul on the head and makes him unconscious after which he wears a Sherwani and sits beside Nayan.

Further, Ishaani calls Nayan and asks her how she could get married and tells her to leave while Nayan says that Rahul is a good man.

However, Mohit sees the bracelet on the groom's hand and realizes that it is not Rahul but Samrat and he is the one who had given the specially designed bracelet to him.

Further, Mohit informs Ishaani that Nayan is not getting to Rahul but Samrat and the pair rush to stop the marriage.

The marriage rituals continue between Nayan and Sam while at the hospital, Malti gets discharged.

Patti tells her that she will call Nayan and Rahul home only after the marriage to give them blessings.

© Copyright tellybest.com, 2022, 2023. All Rights Reserved. Unauthorized use and/or duplication of any material from tellybest.com without written permission is strictly prohibited.
Cached Saved on: Thursday 26th of January 2023 04:23:51 PMCached Disp on: Sunday 5th of February 2023 04:26:50 AM